Marfa The Brooklyn of Texas

Marfa is a strange place. It's a small town the actual middle-of-nowhere West Texas but it's on the radar of every hipster, art dealer, and artist living in New York, LA, San Francisco and Portland. People flock to Marfa from all over the country to visit the galleries and see the mysterious lights, even though it's probably the most remote destination vacation with the nearest airport 190 miles away. Most establishments are only open Thursday through Sunday to accommodate the weekend crowds, leaving full-time travelers like us high and dry. 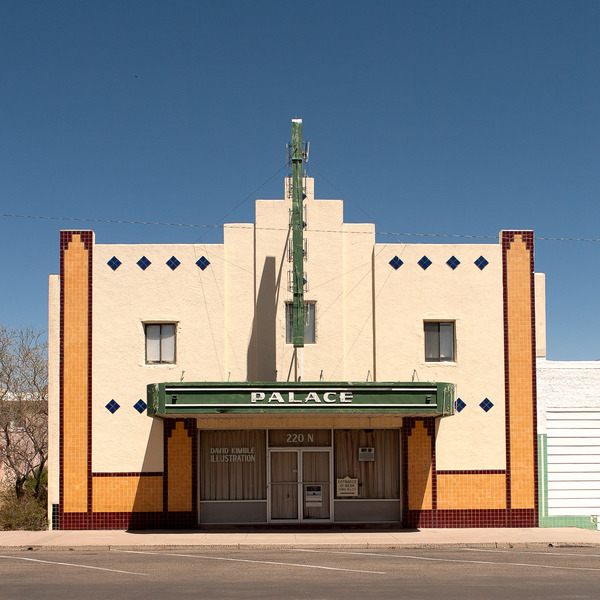 Like I said, Marfa is a strange place. Some might call it overrated. Some might say it's just a little eccentric. I say it's the Brooklyn of Texas. 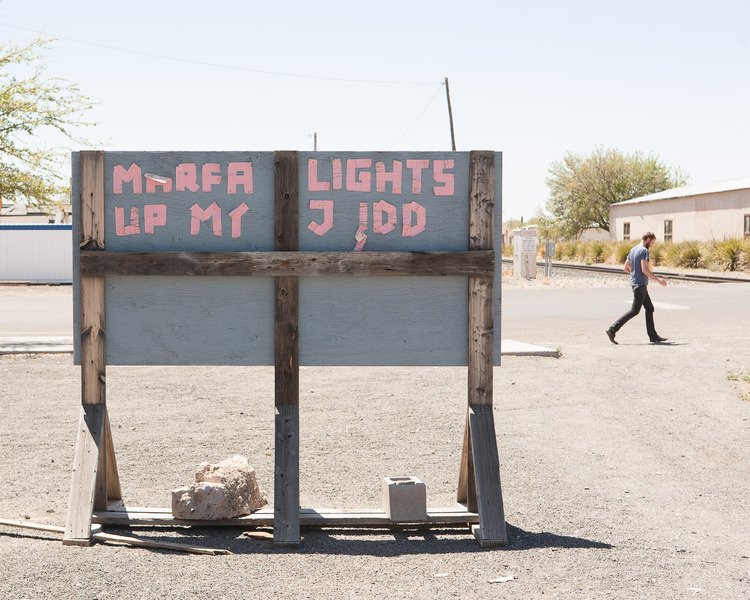 We pulled into to the Tumble In, an RV park on the outskirts of town, where we set up camp next to another Airstream and a giant Spartan trailer (which I am now in love with). We got in on a Tuesday, so we were mostly shit-outta-luck as far as doing anything in town went. Luckily the campground had excellent WIFI, which meant work and catching up with Game of Thrones (of which we recently became unhealthily obsessed). 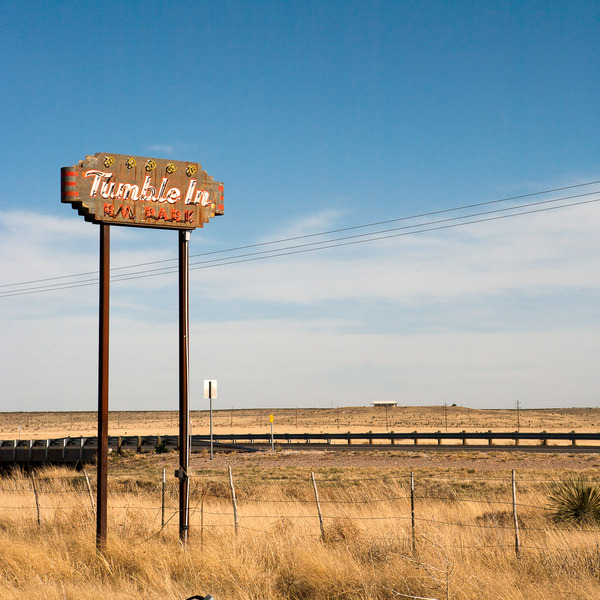 Wednesday we took our bicycles out for a spin to pick up some supplies at The Get Go, Marfa's fancy grocery store. It was a great little shop, with lots of local goods and produce; the kind of grocery store that you feel like you should shop at. But unfortunately for us, a couple of minimally employed travelers whose truck has a very hearty appetite for diesel fuel, the pretty penny those feel-good groceries set us back was more painful than satisfying. 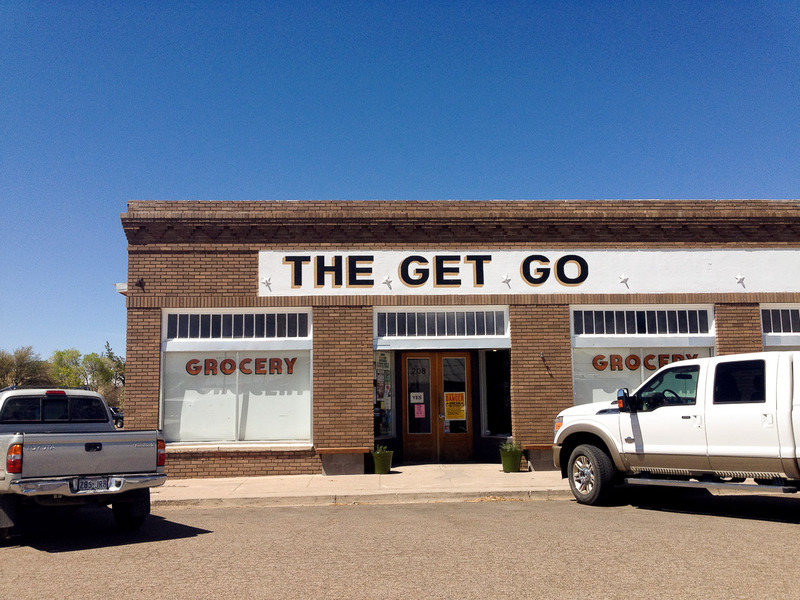 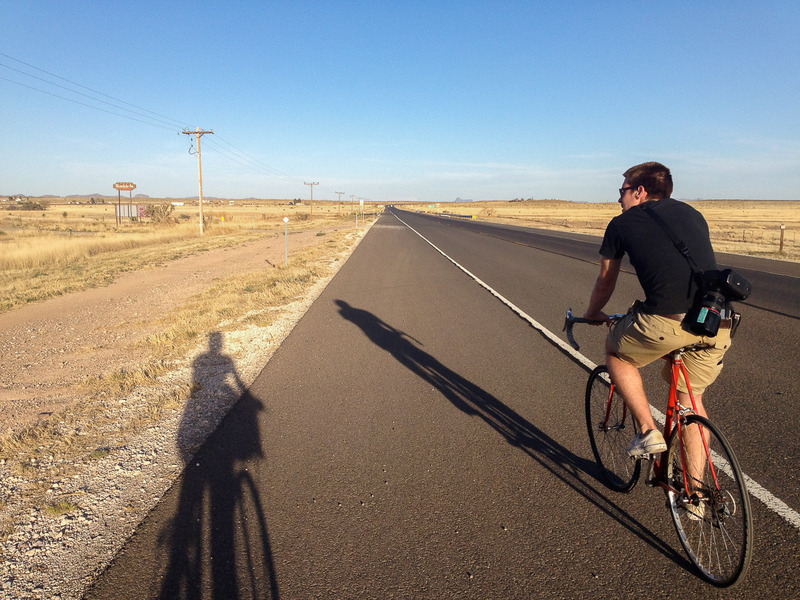 Despite our fancy groceries, we decided to grab a few beers at a local bar we had biked past on our way into town. Borunda's Bar and Grill was miraculously open, though sparsely populated when we arrived. The waitress, who had spent her whole life in Marfa, immediately called us out as out-of-towners. "Yeah, it's that small of a town. Everybody knows everybody." she said after taking our drink order. We had heard that Borunda's had a fantastic burger, so we ended up ordering a barbecue pulled pork sandwich, a sable burger (a hamburger with a hotdog on top) and a side of fries. The pulled pork was perhaps the best I've had, the sable burger was surprisingly amazing and the fries were perfect. We weren't expecting such an exceptional meal from such a unpretentious place; we were very pleasantly surprised. 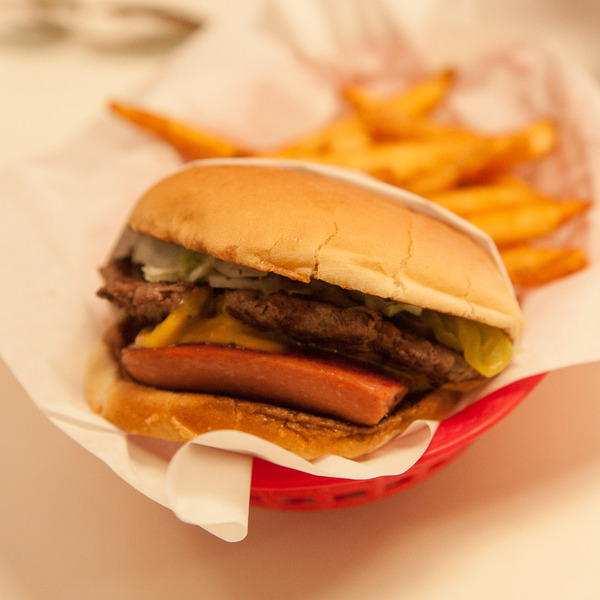 Once the sun went down, we decided to drive out to see the Marfa Mystery Lights. These unexplained glowing orbs of lights can sometimes be seen hovering off in the distance from the viewing area. After probably the darkest drive of our lives (Marfa is really in the middle of nowhere), we arrived at the viewing platform where there was already a group of people patiently staring off into the dark field. Then, out on the horizon, we saw a small ball of light gradually brighten and dim while slowly moving west. It wasn't headlights, it was too low to be a plane, and the change in brightness wasn't recognizable as anything man-made. We watched it move and glow and even looked at it through a telescope provided at the viewing platform. No one has really been able to explain what the mysterious lights are even though there has been extensive research done in the area. Alien or of this world, we saw the Marfa Mystery Lights.

The next day we moseyed over to the Chinati Foundation. Situated on 340 acres of land on the outskirts of town, this contemporary art museum was founded by artist/sculptor Donald Judd, who moved to Marfa in 1977. It was originally meant to exhibit his large-scale concrete and stainless steel sculptures, alongside work by peers Dan Flavin and John Chamberlain, in harmony with the surrounding architecture and nature. Over the years it has expanded to display the works of many other prominent artists and really put Marfa on the art world map. 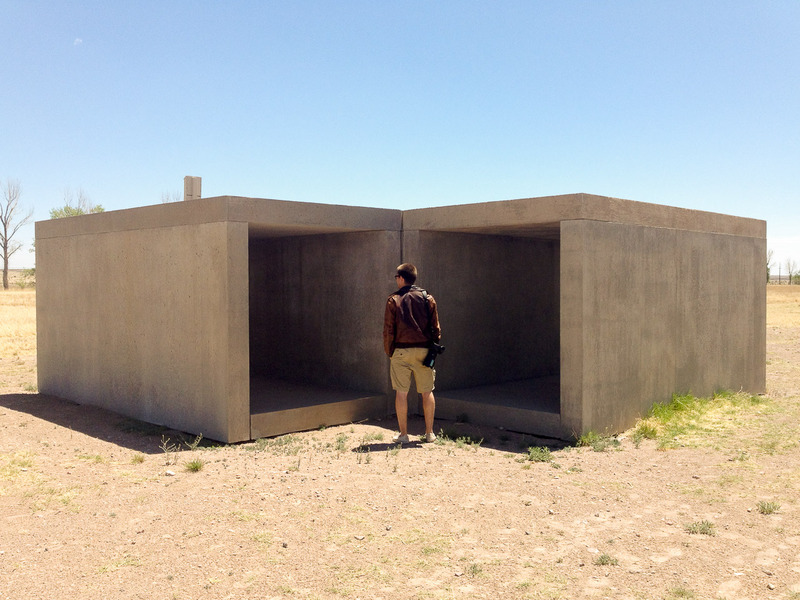 Only the outdoor sculptures were open to tour when we were there (surprise, surprise), which consist of clusters of smooth concrete boxes variously arranged along a one kilometer span of field. I thought it was kind of interesting; each box the same dimension, but formed differently and arranged to frame your view of the surrounding area in a certain context. Plus, you can visualize how long a kilometer is, an otherwise trivial and unmeasurable length (to me at least). John, however, was not impressed. Not that I blame him, contemporary art can be frustrating and seemingly pointless. 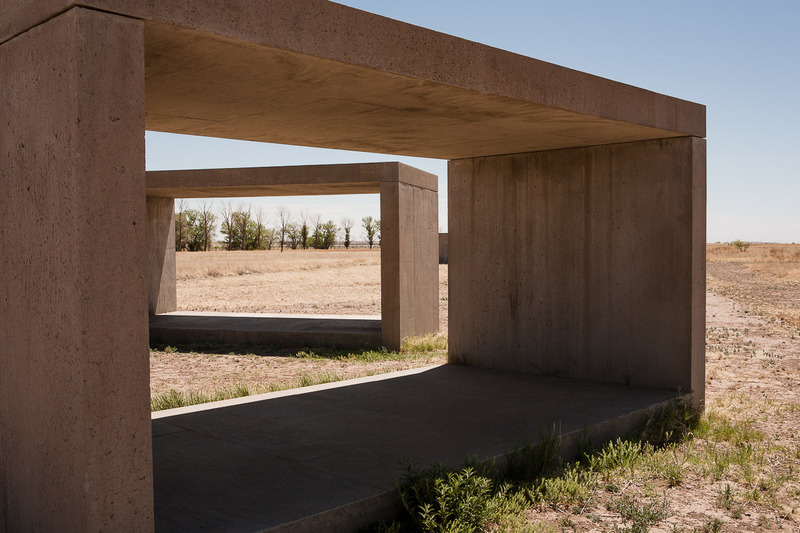 Hungry for lunch, we asked the guy working in the gift shop what food establishments were open (we learned quickly to never assume anything was open in Marfa). He suggested we check out Food Shark, a Mediterranean-meets-Texas food truck usually parked near the train tracks on Main Street. We got there just before they closed and snagged some juicy red chile beef tacos and a hearty and flavorful mediterranean platter (falafel, hummus and pita chips, greek salad and pita). 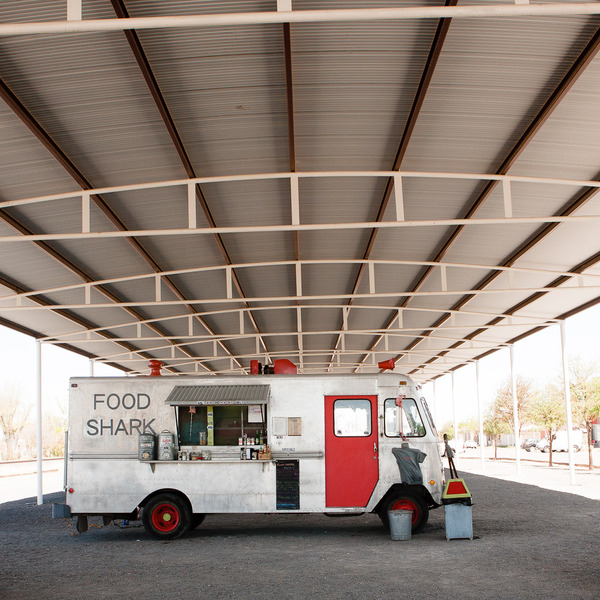 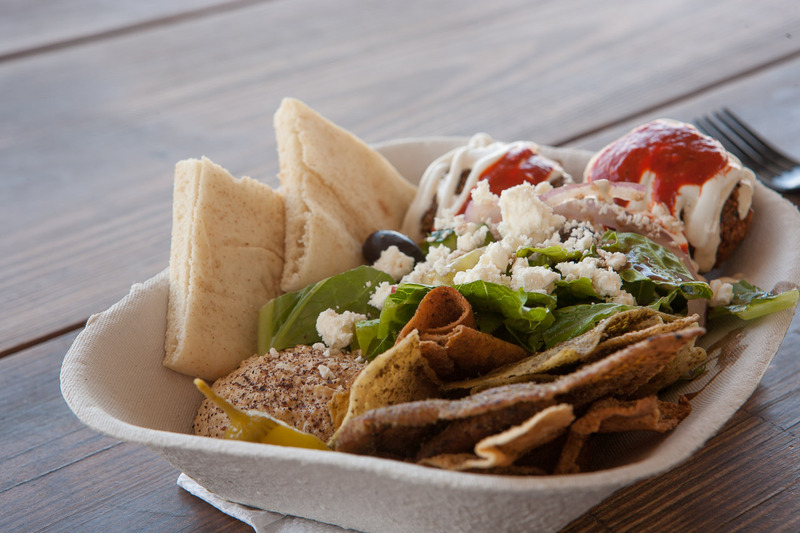 On our last day in Marfa, we met up with Eugene Binder, a friend of my parents who owns a gallery in the center of Marfa. When we arrived at the gallery (a former mechanic shop), the garage door was up, flooding the lofty-ceilinged, white-walled gallery with light. Gene showed us around the two-room gallery while we caught up and chatted, talking about art, the frustrations of living in Marfa and our travels. Gene has worked and lived part-time in Marfa since the early 1990s when he started the gallery and the art scene was still relatively small. He's watched the town change and grow; he explained to us that in recent years he's seen young artists move from big cities to join the Marfa scene, realize the inconveniences and unsustainability of living in a small town and pick up and leave. I suppose it isn't a lifestyle for everyone. 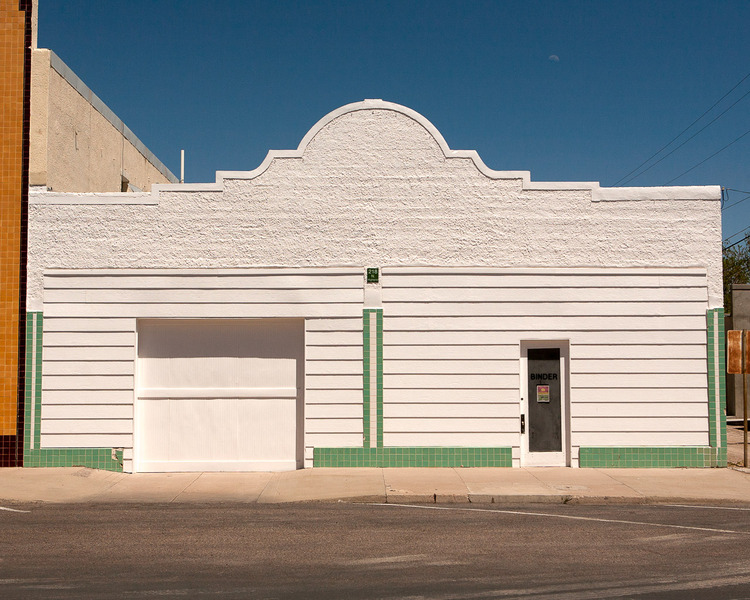 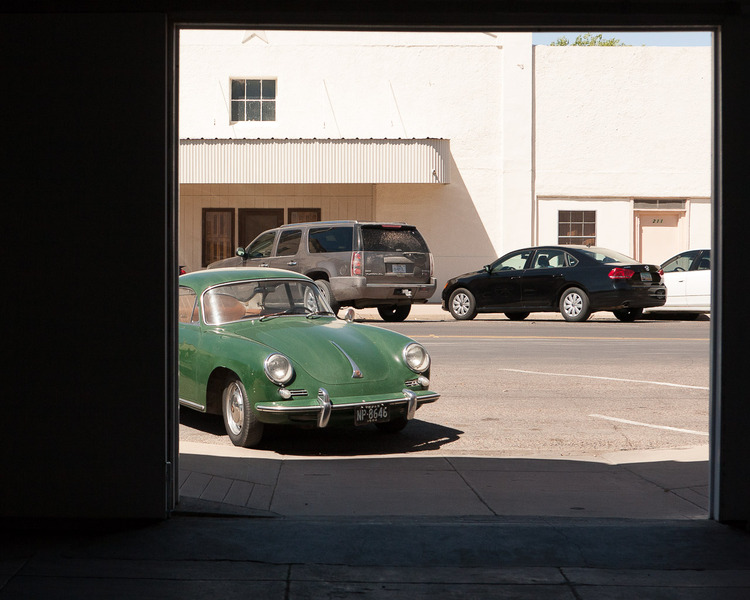 We bid Gene farewell, thanking him for letting us explore the gallery before wandering around the small downtown. We stopped to browse a local bookstore and the friendly older gentleman working behind the counter, recognizing us as "not from around these parts", let us in on a secret; the crows nest of the courthouse at the end of the street is open to the public and you can see the entire city from the top. We followed his detailed instructions, taking the elevator to the top floor, then walking up two sets of stairs to the airy, sun-filled crows nest with a 360-degree view of Marfa. It was incredible to be able to see the entirety of a town, from one edge to the other. 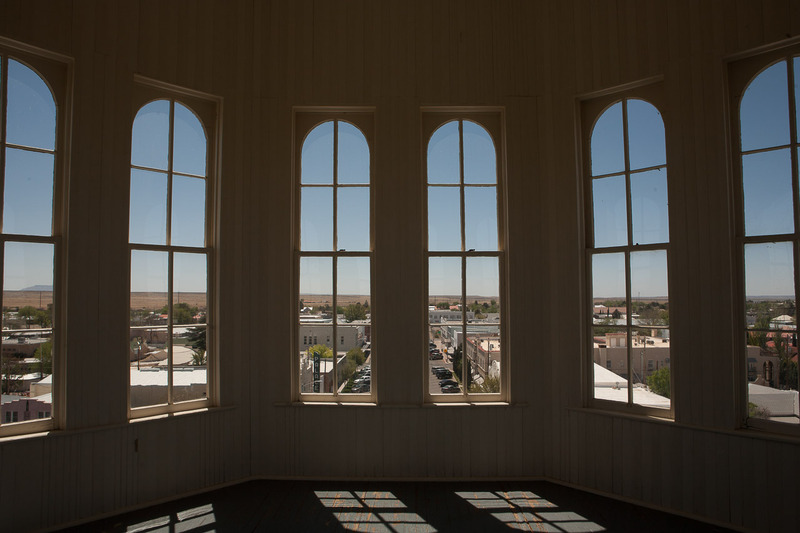 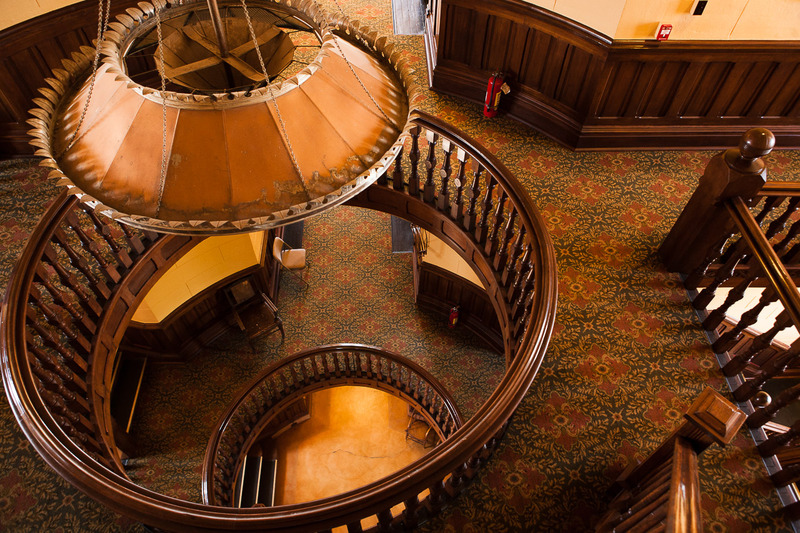 The beautiful insides of the courthouse

Before leaving Marfa, we stopped to get some lunch at Fat Lyle's, another food truck across the street from El Cosmico, the super hip "hotel" in town where you can stay in a refurbished trailer, teepee or tent. We had heard great things about Fat Lyle's sandwiches, but when we pulled into the large front yard where the truck was parked, we were the only ones there. "Slow day so far" the owner told us. I imagine there are lots of slow days in Marfa. However, the lack of a crowd was not indication of the quality of the food; our sandwiches were oh-my-god amazing. John got something porky and cheesy that he quickly and quietly gobbled up. I got the broccoli bolillo (a broccoli sandwich..whaaat??) that had grilled broccoli, caramelized onions and garlic, french fries, a bunch of melty asadero cheese and some awesome spicy sauce. Sounds odd, but oh lord, it was an incredible sandwich. I wanted to eat it forever. And it was really healthy….because broccoli is a vegetable. Right. 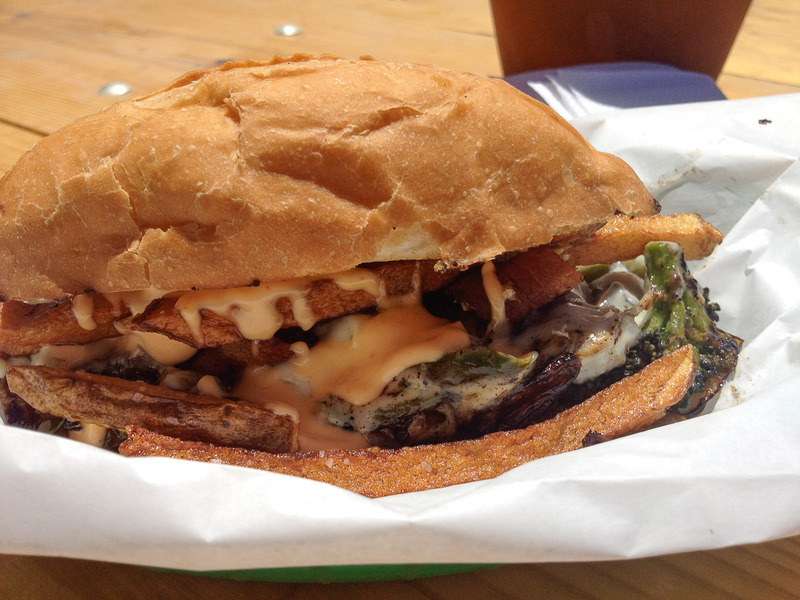 Full and happy, we headed back to the Tumble In to pack up and head north to Fort Davis. I can't say we had a terrible time in Marfa, we found the quirky eccentricities of small town life kind of charming. And the food was really, really delicious. Marfa isn't a place that we would want to live, but it's worth spending a weekend experiencing the culture and exploring this anomaly of a West Texas town. 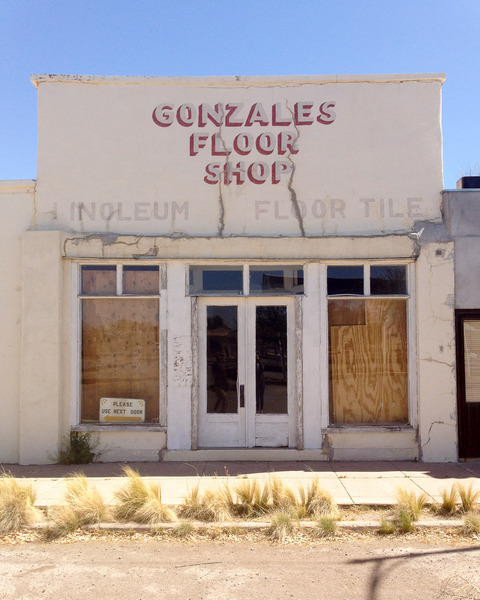