The mountains of Canada were calling. Wednesday morning, we embarked on our second group caravan towards Canada's Glacier National Park. The dumbfounded stares we got from Canadians in cars passing by our string of eight Airstreams with American license plates were priceless. Walkie-talkies resumed their function as joke-cracking devices, mostly to the tune of making fun of Canada and their metric system.

Obeying the 100 km/h speed limit, we drove past some incredible landscapes. The countryside slowly changed from vineyards and orchards to forests and snow-capped mountains. We passed through Sicamous, the self-proclaimed houseboat capital of the world, which did indeed have an inordinate amount of houseboats on it's beautiful alpine lakes. The deeper we drove into Canada the more dramatic and mountainous it became. 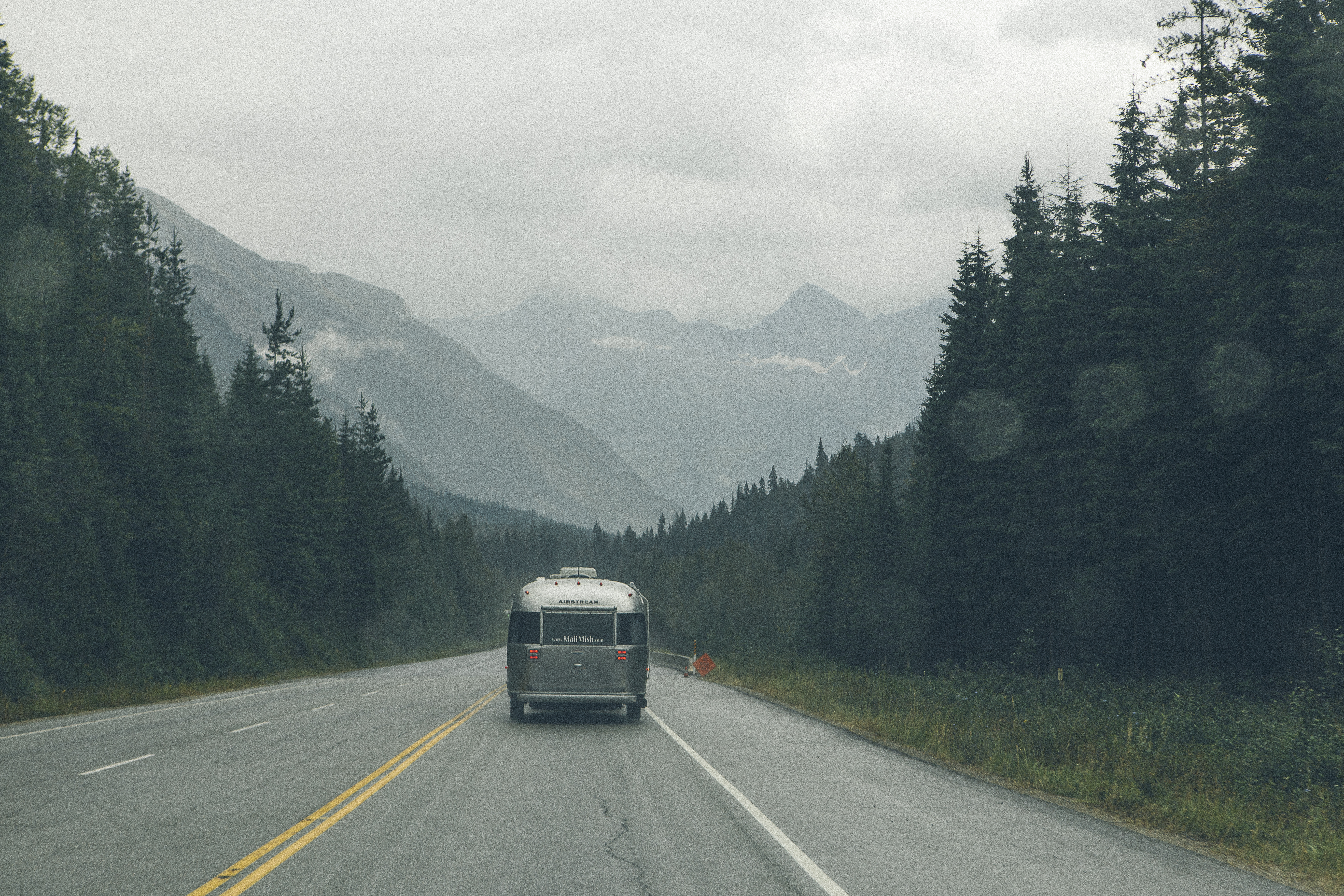 Caravanning through Canada behind MaliMish

As the caravan inevitably broke into smaller groups, a few of us reconvened and took a break from driving in Revelstoke, the last large-ish town before our final destination. We stretched our legs, walked the dogs and played with the kids before the last Airstream caught up and we continued on towards Glacier National Park. 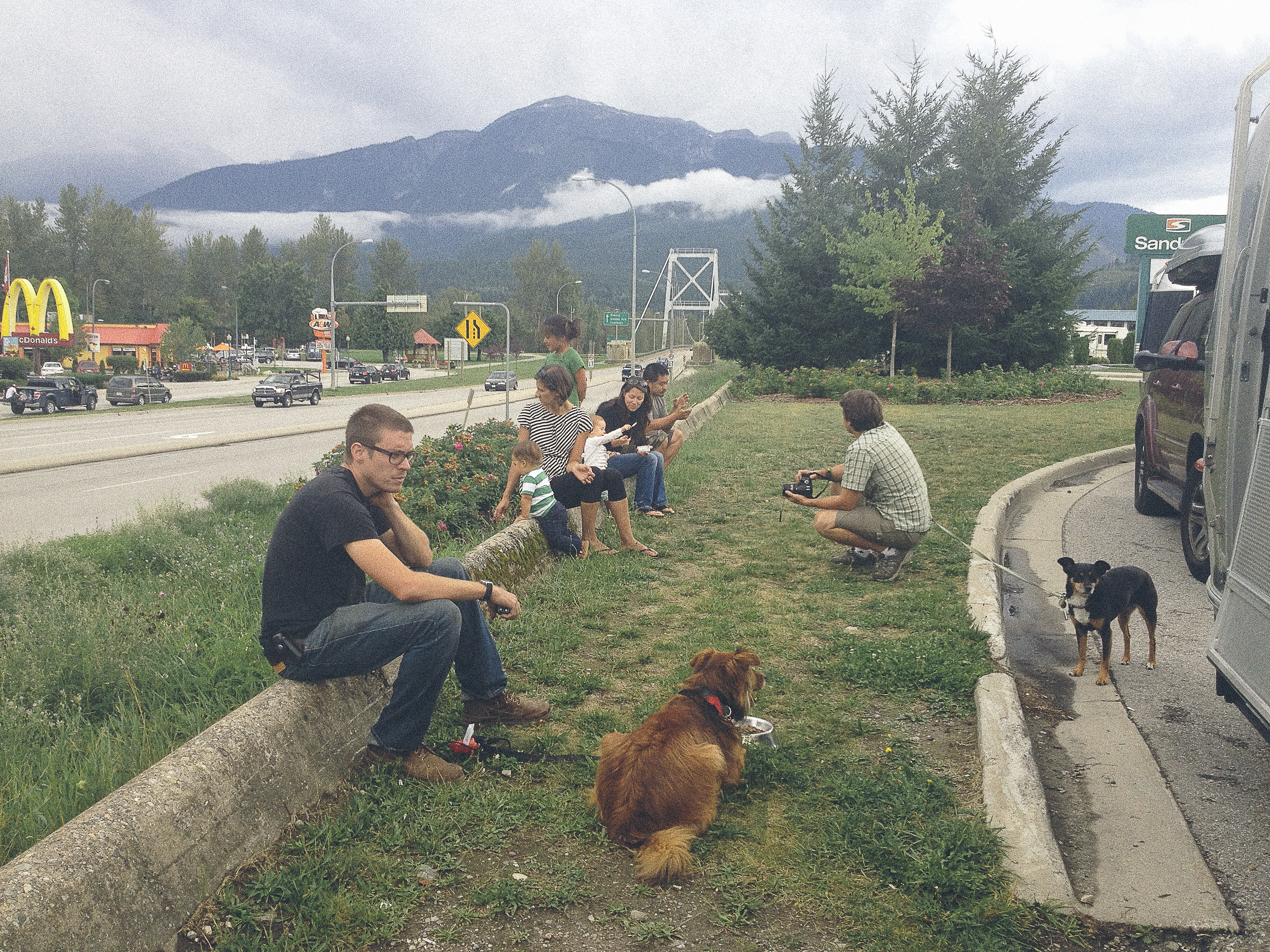 The highway leading to the national park was consistently steep and it was beginning to rain, but we didn't notice. We couldn't stop staring at the incredible mountains that were rising all around us. Jagged, snowy peaks loomed 4,000 feet - I'm sorry, 1219.2 meters - over the valley we drove through. The Canadian Rockies really giving the American Rockies a run for their money. They were breathtaking. 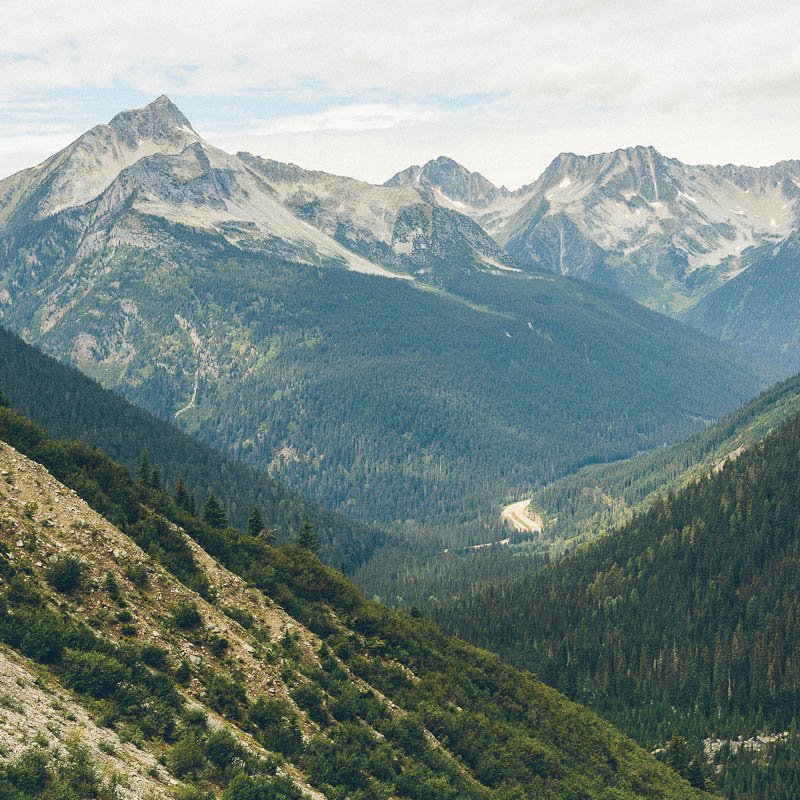 Glacier National Park (the Canadian one)

We made it to the Illecillewaet Campground (ill-uh-silly-wat…I think that's how you pronounce it?), where Leigh and Brian had saved us stragglers a campsite. This campground wins forever as the most beautiful: it was right next to a glacial whitewater river, super lush, pine trees everywhere (it smelled like Christmas!) and no civilization within hundreds of kilometers. There was something really special about it I still can't put my finger on. 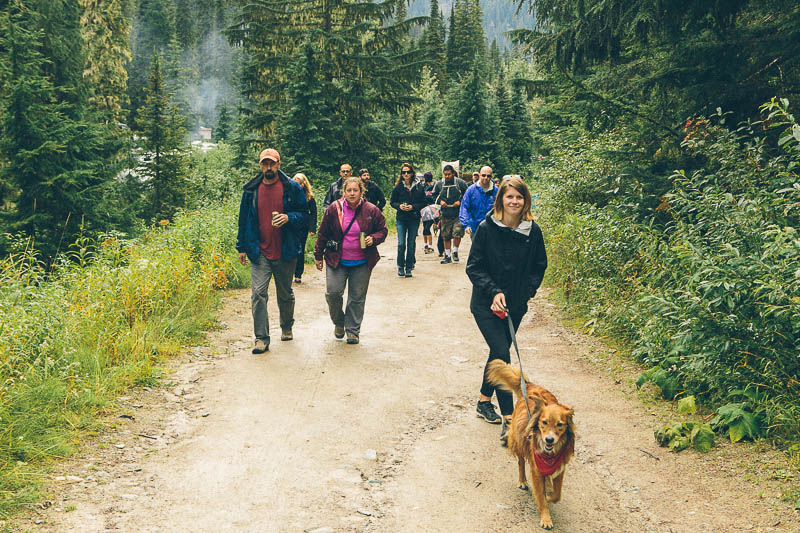 Once everyone had arrived and settled into their sites, the whole gang gathered for a group hike. It was less of a hike and more of a walk; it was two miles round trip and people brought wine along. All twenty-one of us, including a few of the dogs, walked through the alpine meadows and mossy forests towards our destination: Meeting of the Waters. 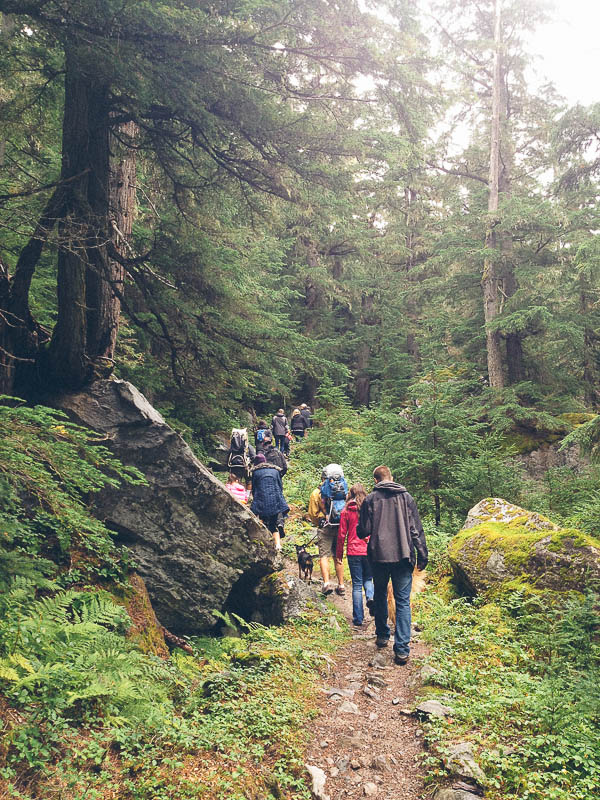 Hiking through the forest

Meeting of the Waters is exactly what it sounds like - two rivers that meet and form one river. August is one of the warmest months in Glacier National Park (still not very warm) and the rivers, runoff from the glaciers high up in the mountains, had been unleashed in full force. The water was a furiously cloudy grey-white and the roar of it rushing underneath us was deafening. 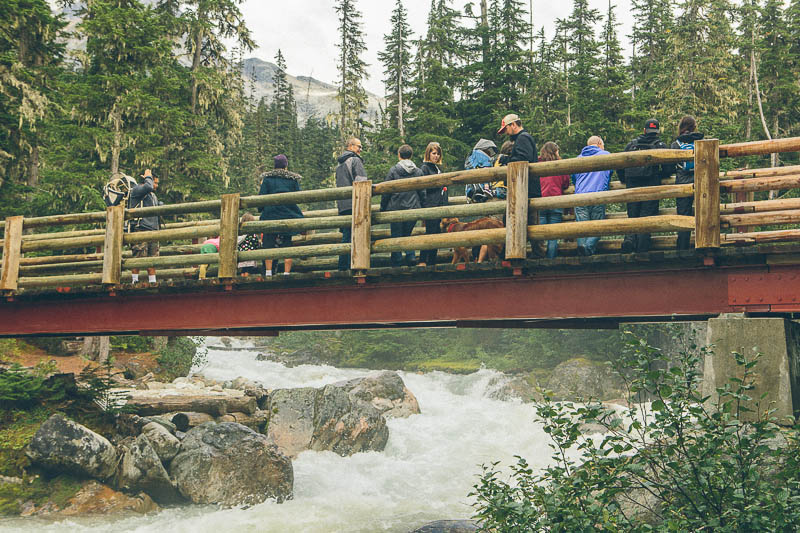 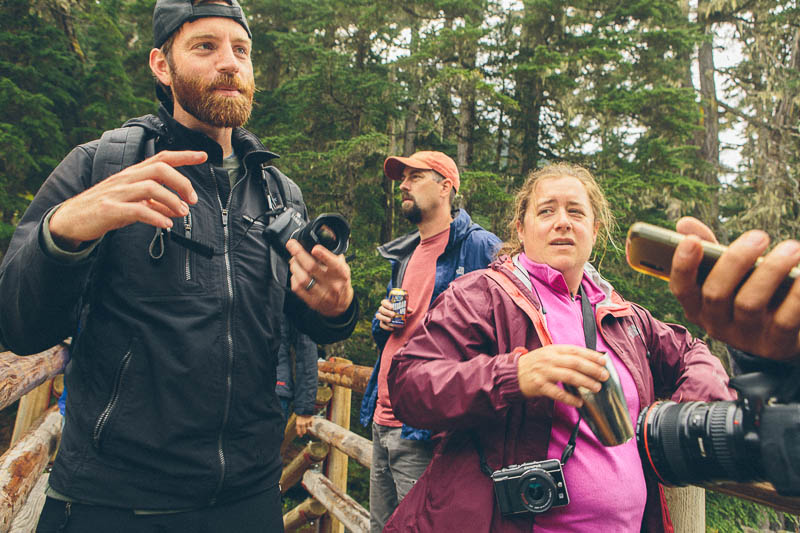 So many cameras...and a little wine and beer

Half the group continued up through the valley, while the rest of us turned back to camp to start on happy hour and dinner. Later that evening we all reconvened around Leigh and Brian's campfire to roast hotdogs and s'mores. 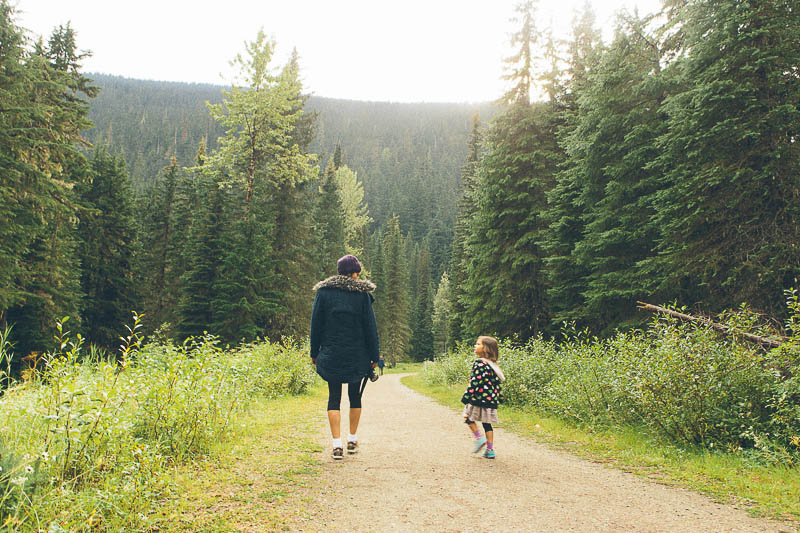 Marlene and Mila of MaliMish

Thursday was hiking day. With no cell signal or internet and in the middle of an incredibly beautiful national park, there wasn't really much to do other than to hike. We lead a rough life, I know. Someone has to do it. 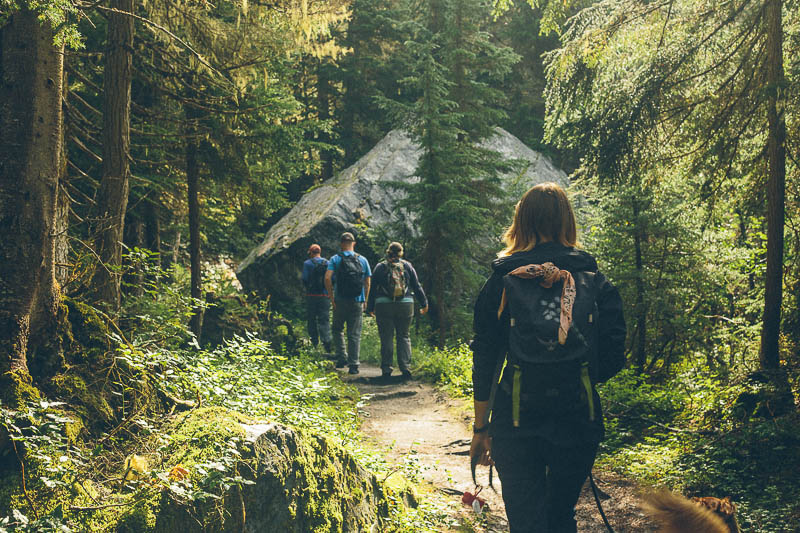 John, Bulleit and I decided to join Amanda, Tim, Leigh and Brian on a six mile hike through the valley behind our campground. After the hike we went on a few days before at Leigh and Brian's property, I was confident in, albeit still slightly intimidated by Amanda's hiking expertise and trail choice. 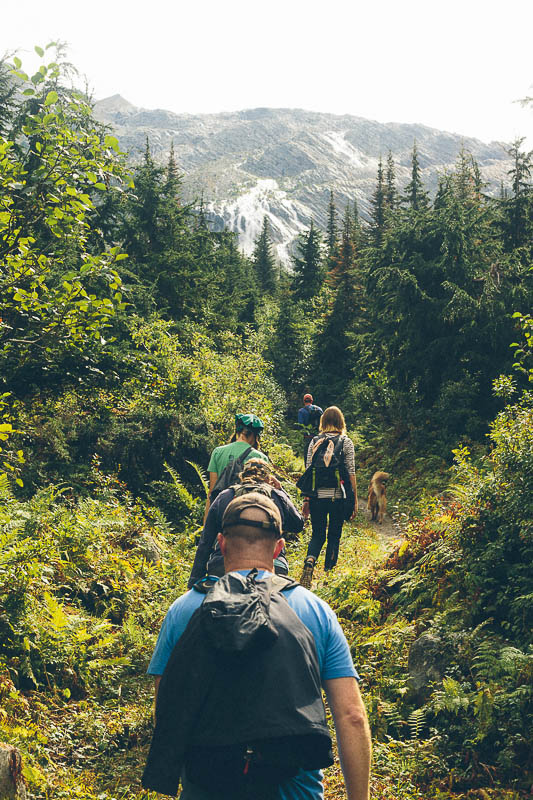 We started off through the same lush forest that we had hiked through the day before. Once the trail forked, we went right and followed the Illecillewaet River until we got to the steep switchbacks that took us higher up the mountain. 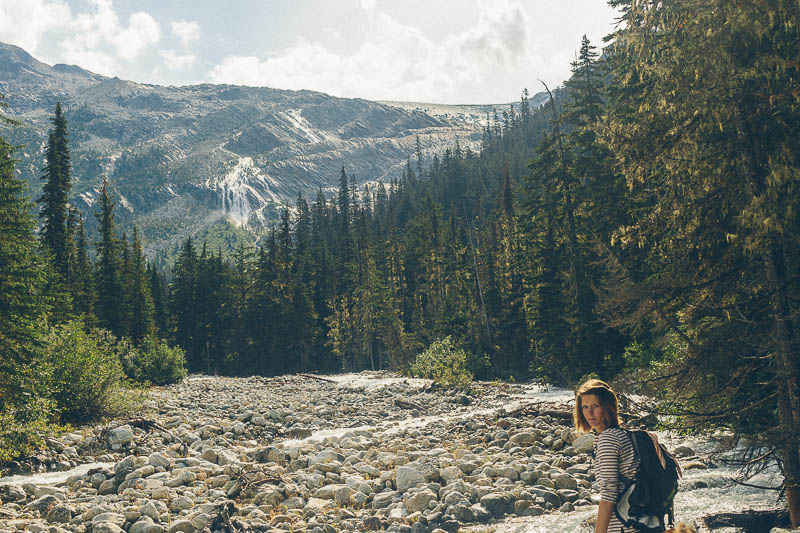 After what seemed like forever, we finally reached the end: an expansive view of the green valley we had hiked through, with jagged mountain peaks surrounding us and the most awesome glacial waterfall that spread like fingers and roared over a series of cliffs. 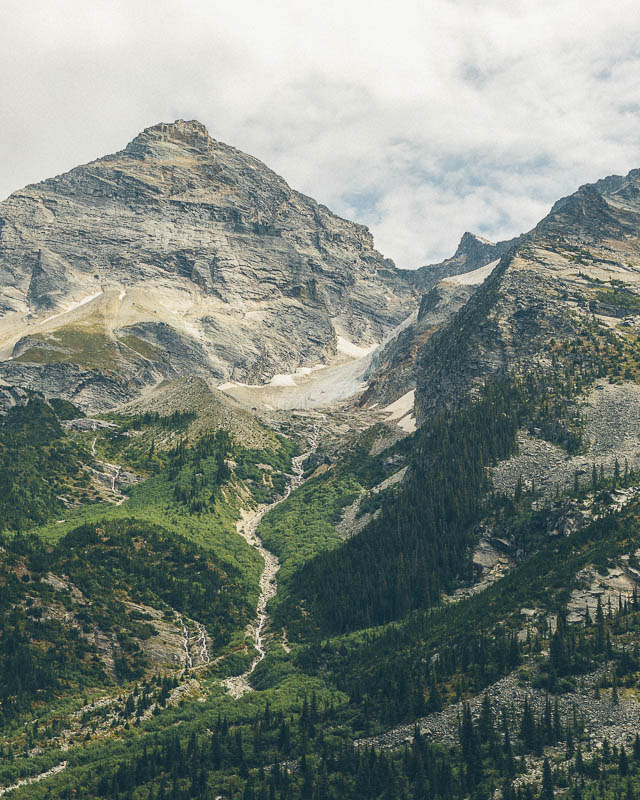 Exhausted and hungry, we sat down to eat lunch overlooking this incredible vista. To say It was one of the more scenic meals we've had would be an understatement. 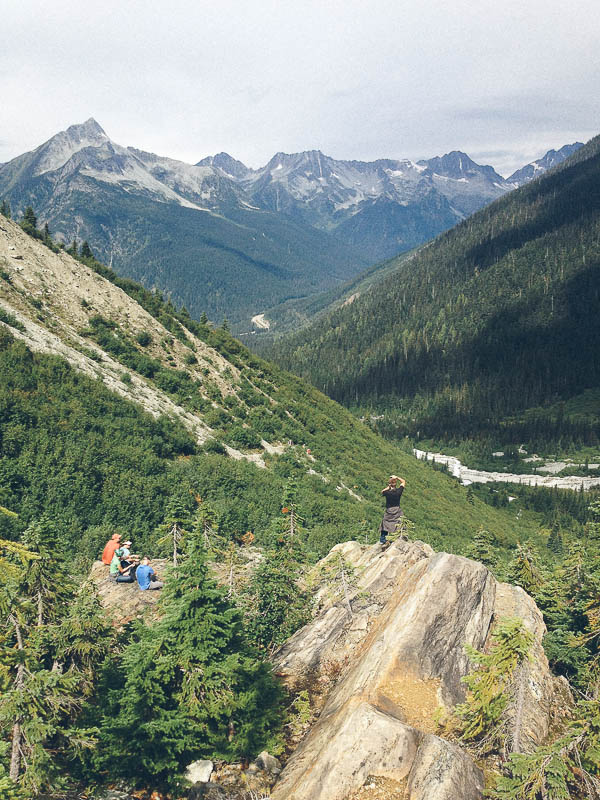 Two hours and another jello-y legged descent later, we made it back down to camp without any bear run-ins. I guess I forgot to mention this earlier: Canada is CRAWLING with bears. At least according to every sign and park ranger we came across. We were warned to stay in large groups, make lots of noise while hiking, and carry bear spray. Unfortunately…or maybe fortunately…we didn't see any bears the whole time we were in Canada. We were only slightly disappointed.

We all took the afternoon to relax and recoup from our active morning. The rest of the gang trickled back into camp by the evening and gathered around the campfire by nightfall, where we swapped hiking stories and joked about all the bears and glaciers we saw (none and barely any). 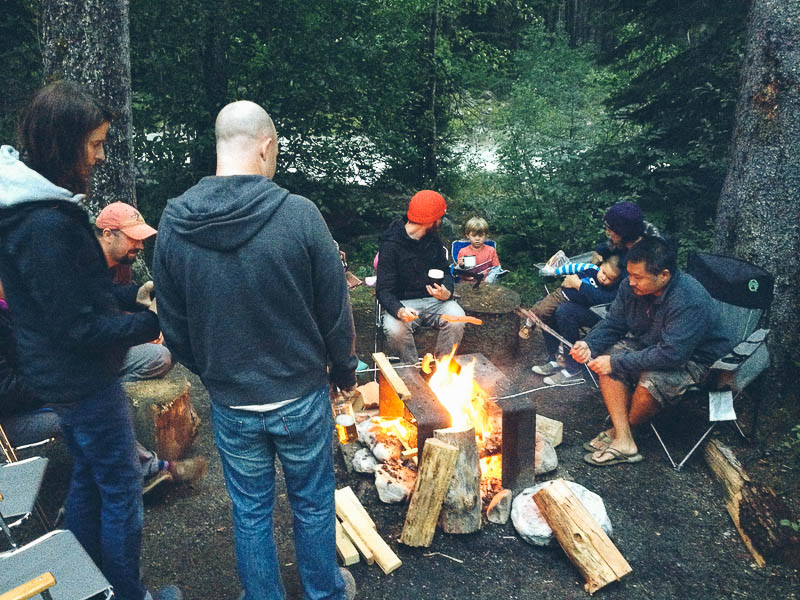 The next morning was an early one - we were driving to Banff! But it was bittersweet. On one hand, Banff was supposed to be ridiculously beautiful. I didn't know how it could get better than this, but it would. And we were meeting up with Kyle of Where Is Kyle Now? and Nathan, Renee and their three boys of Wand'rly Magazine. But on the other hand, the week had flown by. This was our last caravan and we only had three more days together. The experience was kind of like summer camp (for adults) and it was our last weekend with our new BFFs. But what could we do? Drive to Banff, that's what.