September 2, 2013 by Laura Preston for The Front Page

On Sunday, the first day of September, we parted ways with our newfound travel BFFs. There were a few tears and bromantical hugs were exchanged. We didn't hit the road until hours later than planned, trying to soak up those last few moments of hang outs until…well…somewhere down the road.

For some of us though, the caravan was not over. WeaselMouth, Riveted, Where Is Kyle Now and Adv-O-dna were heading north to Jasper National Park to check out the Athabasca Glacier and the Columbia Icefields, both which sounded awesome. We would have loved to join, but after an internet-less and work-less week, we had to get back to the good ol' US of A. Anxious clients and back-logged Instagram posts required our attention. 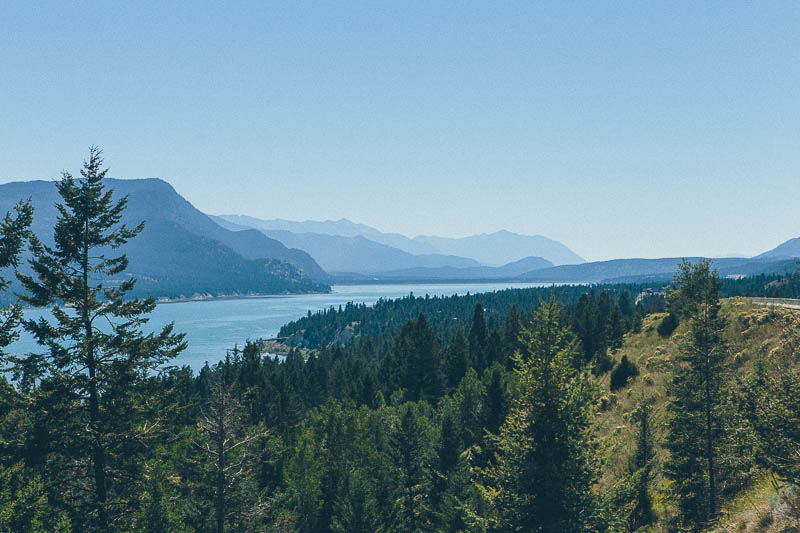 Our drive from Banff back to the United States: the source of the Columbia River

So we decided to head down to Glacier National Park in Montana with Aluminarium and WatsonsWander. After saying our goodbyes, we drove straight south, back to America.

The road from Banff to the U.S. border was beautiful. We saw more awesome mountains and glaciers when we drove through Kootenay National Park, were tempted to take a dip in Radium Hot Springs as we passed by and stopped at a scenic overlook that happened to be the source of the Columbia River. 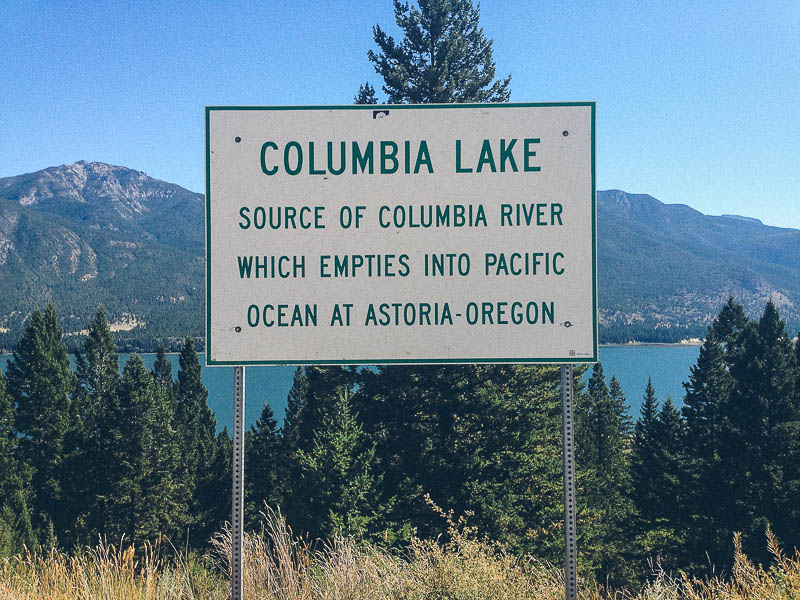 Once we reached the border, we made it through scot-free (not that we had anything to worry about) and headed towards Glacier National Park. We hadn't made any camping reservations and couldn't get in touch with any nearby campgrounds, so we decided to do something we had never done before: spend the night in a Walmart parking lot.

The idea of sleeping in a Walmart parking lot might seem completely insane to most self-respecting folks, but in the RV world, it's quite common. We had gotten the vote of confidence from veteran travelers in our caravan, who are no strangers to the harsh glare of a parking lot flood light. Ideal for a quick overnight stop one-night-stand after you've been driving all day, the Walmart parking lot is relatively safe, convenient and free. Plus they have anything you might need just inside. 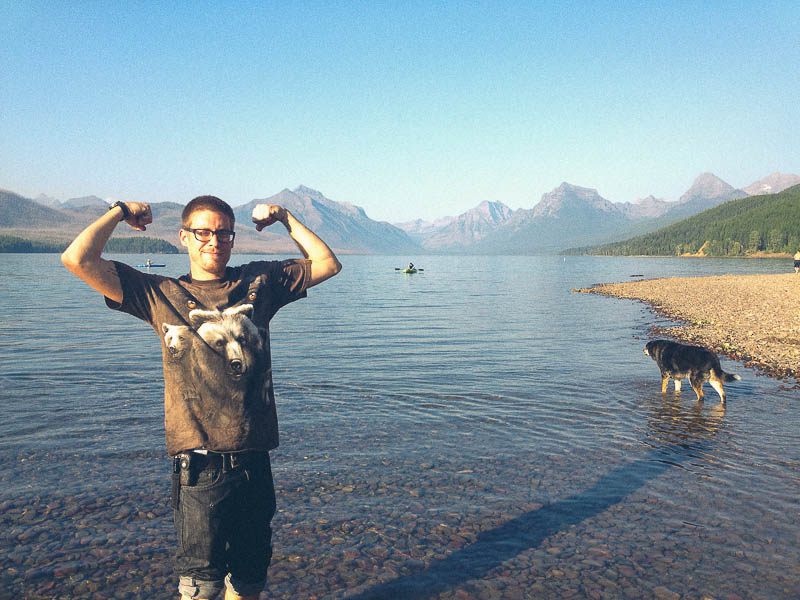 We arrived at the Kalispell Walmart and parked at the back of the lot and walked inside. We asked if it was cool that we stay they night - they said no problem - picked up a frozen pizza and a Redbox DVD and had ourselves a real classy night.

The next morning, feeling only slightly ashamed but well-rested, we treated ourselves to a crappy cup of 99 cent coffee from the Subway inside the Walmart before heading to a campground just a few miles west of Glacier National Park's south entrance. 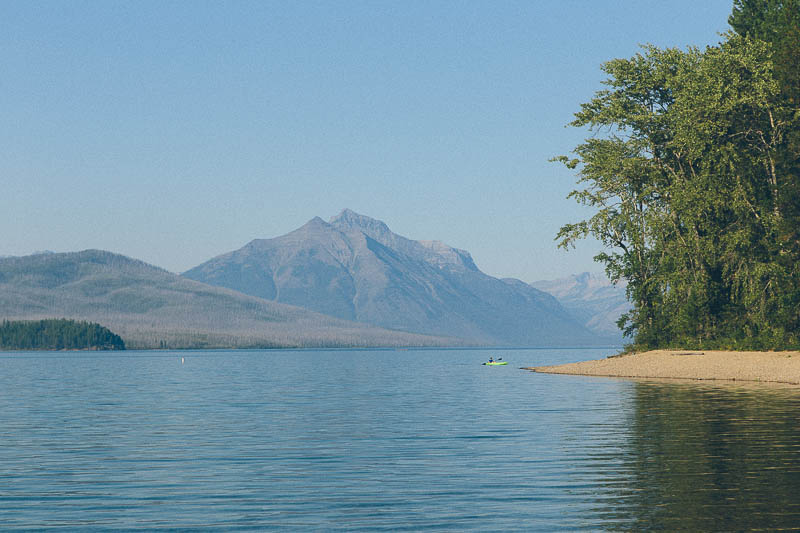 Of the three days that we were there, most of the daytime was spent catching up on work we missed out on during our Canadian vacation. I was a little disappointed that we didn't take the opportunity to explore the national park that was only a few miles away, but after our week of full-time socializing and non-stop activity, we had to play catch-up. 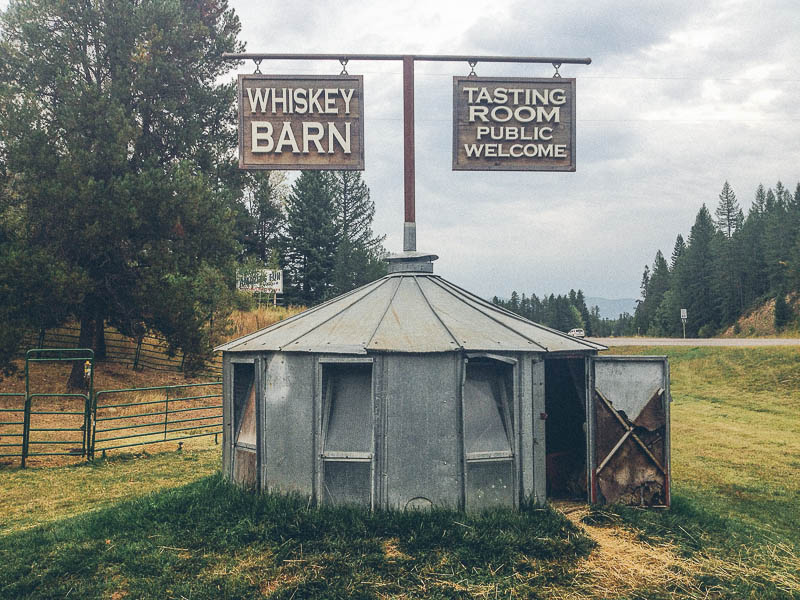 One evening, we invited Leigh and Brian to join us at Glacier Distillery's Whiskey Barn tasting room, which happened to be just a mile away from our campground. 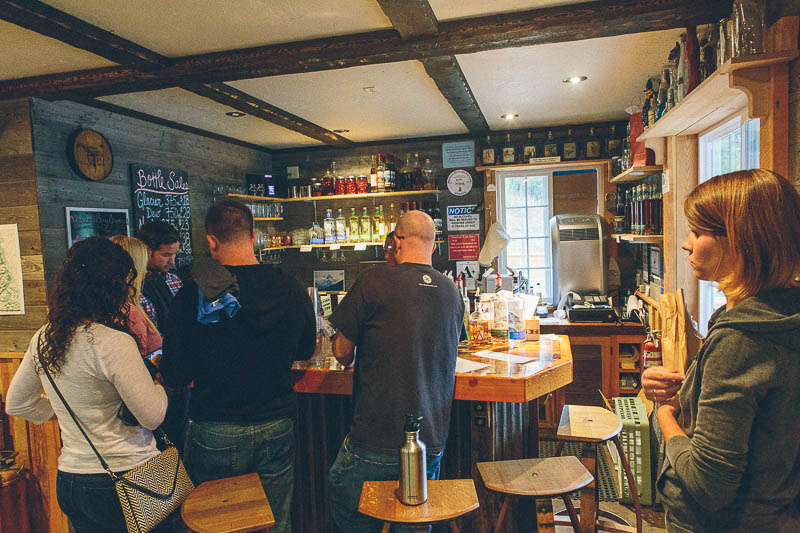 With a small, eight-stool bar and a room not much bigger housing their stills, Glacier Distilling Company is a small-batch operation that specializes in whiskey, but makes a wide variety of unique spirits using local ingredients. 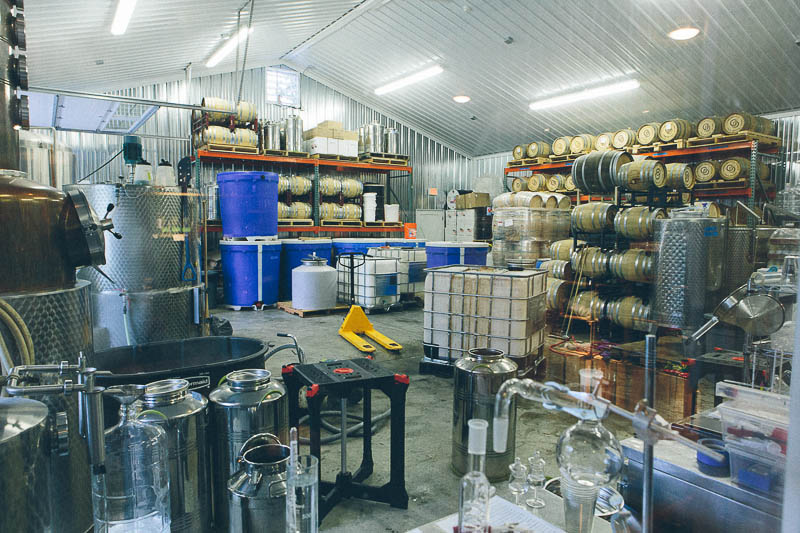 Where the magic happens

For only $4, we got a sip of all of their offerings, my favorite being the Mule Kick, a super-spicy unaged rye whiskey infused with garlic, jalapeno and peppercorns. They also offer a few house cocktails, tailor-made to best showcase their spirits. I would love to have tried all of them, but after tasting all eight of their spirits with no food in my belly, a cocktail wouldn't have been the best idea. 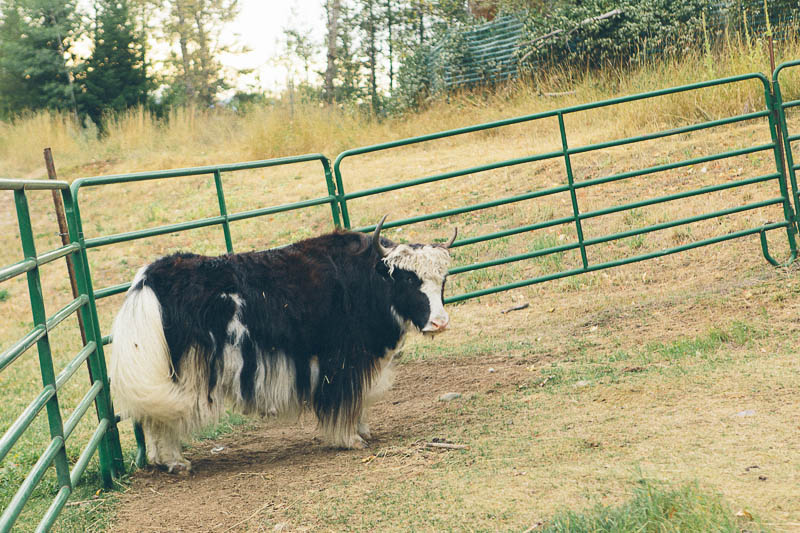 All hungry and little tipsy, Leigh, Brian, John and I drove to the nearby town of Columbia Falls to check out Three Forks Grille, a spot recommended to us by the barmaid, where we had a fantastic dinner together. 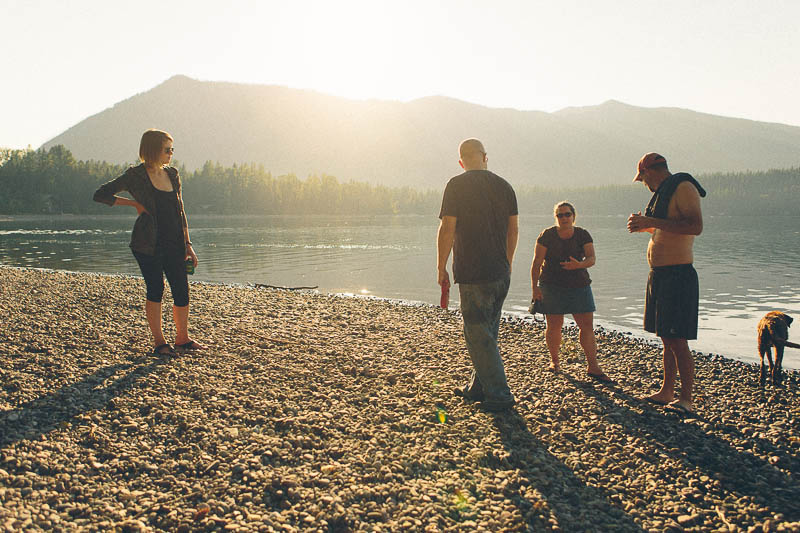 The next evening, we were invited to dinner at the campground where Leigh, Brian, Amanda and Tim were staying, near Lake McDonald in Glacier NP. Fellow traveler Tim aka Van Tramp happened to be staying a few sites down and joined us for dinner. He's been traveling solo around the country since 2010 in an old Dodge camper van and loves the freedom of the road. 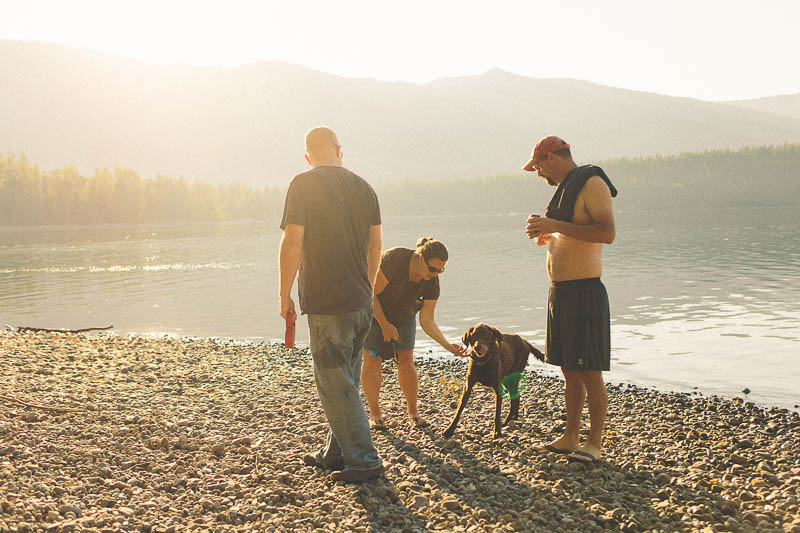 Debating between a before-dinner hike and no-hike, we settled on a walk to the lake. While Amanda, Leigh, Van Tramp and I sat on the banks of the lake, basking in what was left of the day's warm sun, John, Brian and Tim stripped down to their skivvies and went for a twilight lake swim. 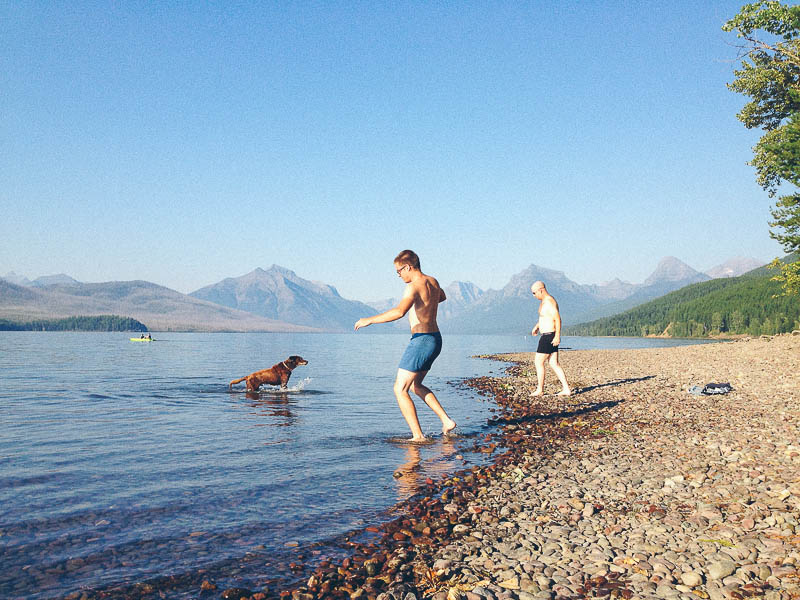 I went back and forth between joining them - the water was perfect, if not a bit chilly - and I didn't. But I should have. 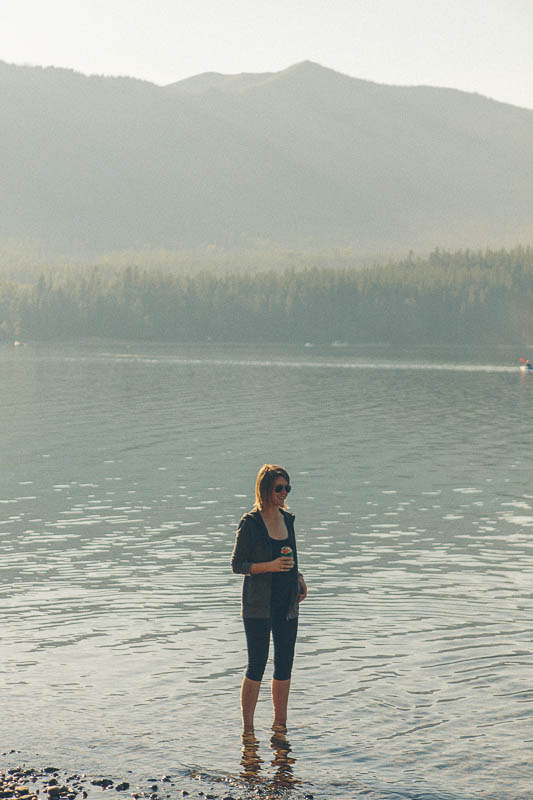 Once the boys emerged from the lake, realizing there were no towels and no sun to dry them, I was glad I didn't jump in. 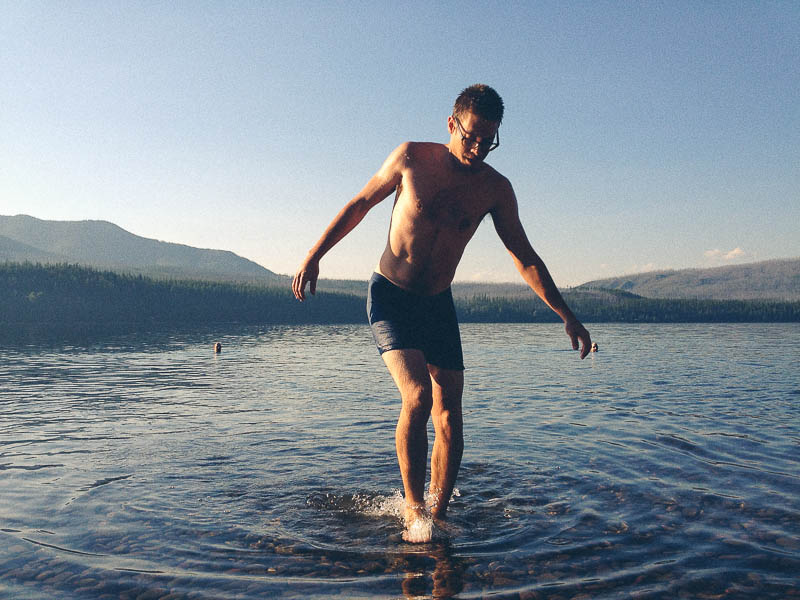 But once everyone was dressed, we returned to Leigh and Brian's campsite to drink beers and eat a delicious dinner of vegan chili, cornbread and salad. 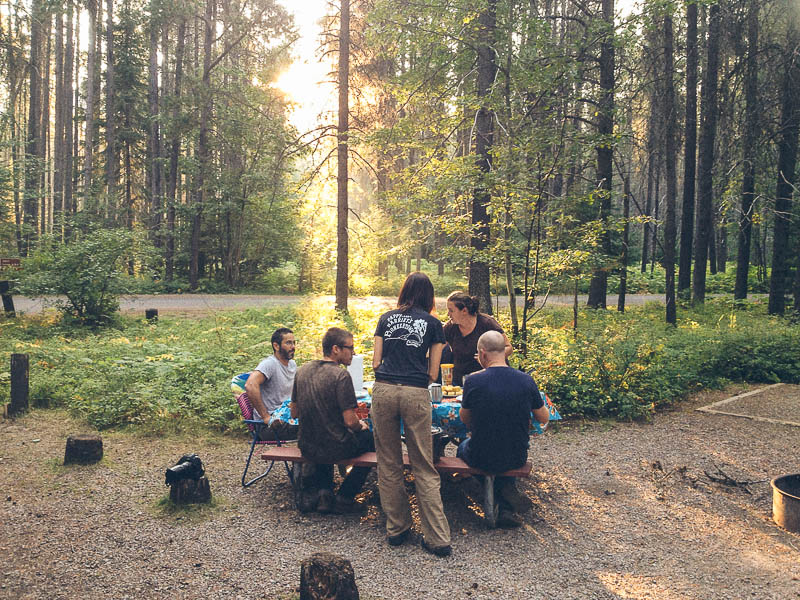 The next afternoon, we planned to head down to Missoula. Now that it was September, we couldn't dilly-dally quite as much. We had to book it over to the East Coast to avoid getting stuck in snow and freezing temperatures. We had the morning to explore the park and wanted to drive the Going-To-The-Sun Road, which is supposed to be incredible, but everyone told us our truck was way too wide. Then we thought we might go on a quick hike, so that we could experience a little bit of Glacier National Park's glory. But a rainy forecast that morning deterred us.

So even though we went to Glacier National Park, we didn't quite experience it. Not enough time. But we loved the area and were glad we got to spend our time there with friends. Next time, we'll come back with more days to spare and a smaller car.

Special thanks to Allison (who suggested Hang with some billy goats. And, you know, explore...) for making this blog post possible!