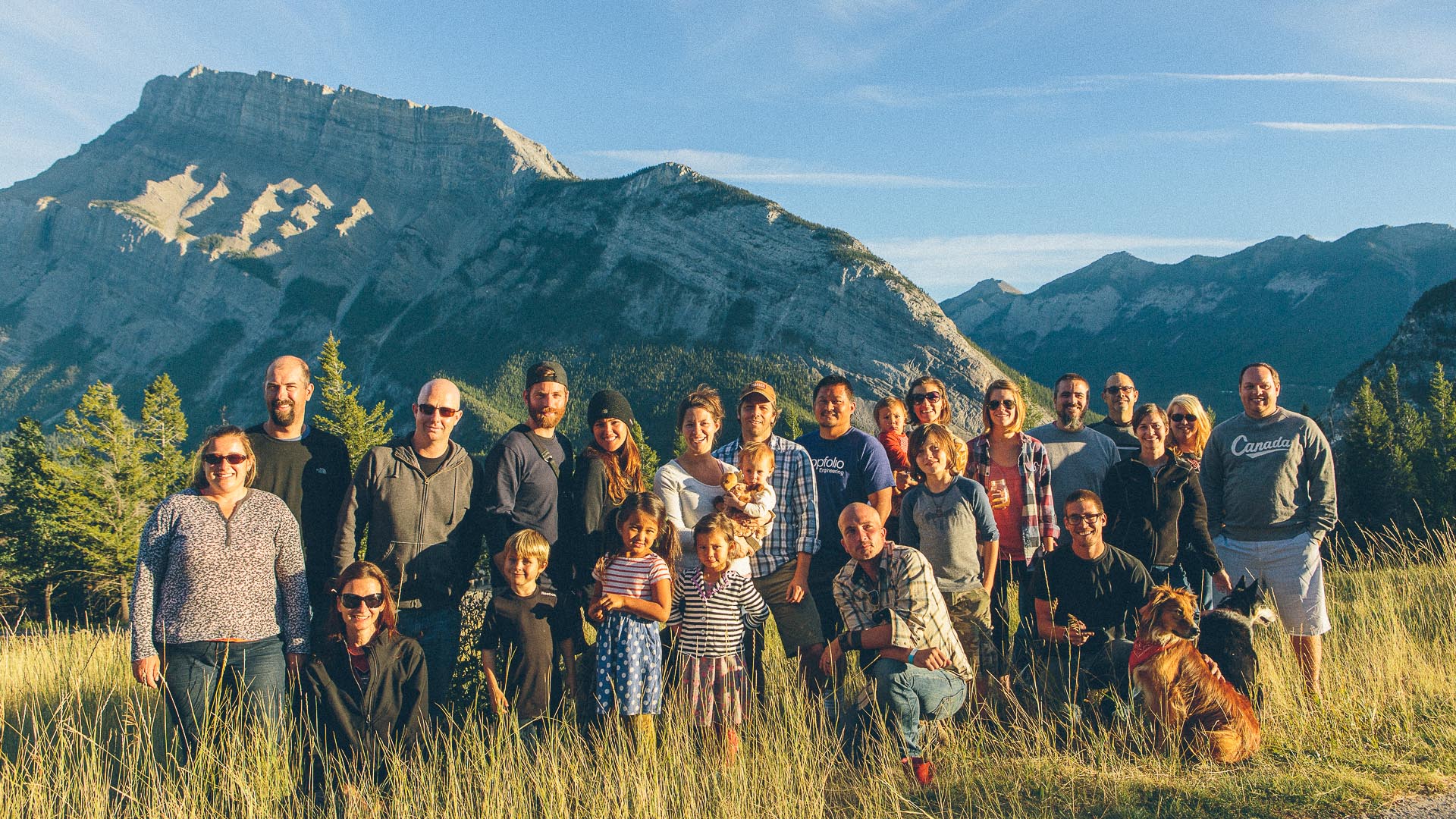 Early Thursday morning, all eight Airstream families packed up and hit the road for what would be our last group caravan of Aluminogan. We headed towards our final destination: Banff National Park. 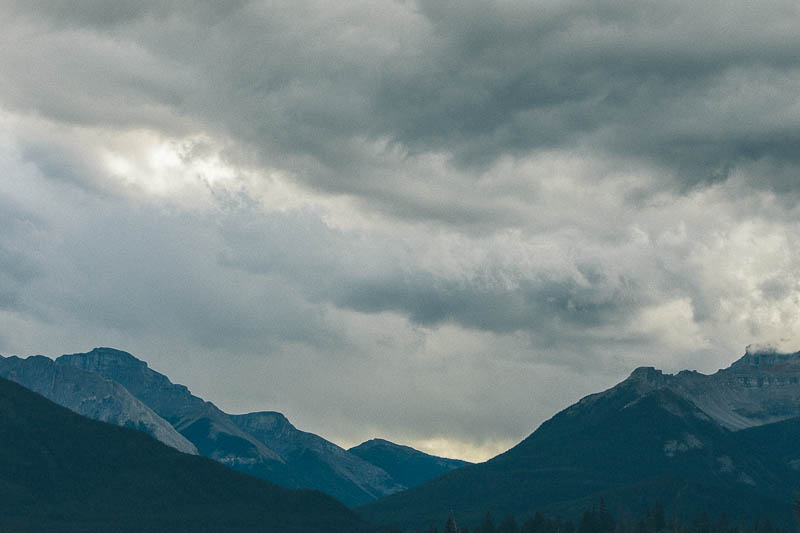 The drive was nothing short of spectacular. I really didn't think that the scenery could get any more jaw-dropping after spending the last few days among the raw, jagged peaks of Glacier National Park, but it did. It's hard to convey the sheer size and awesomeness of these dramatically steep mountain ranges, but I will tell you this: the Canadian Rockies are my new favorite. Don't tell America… 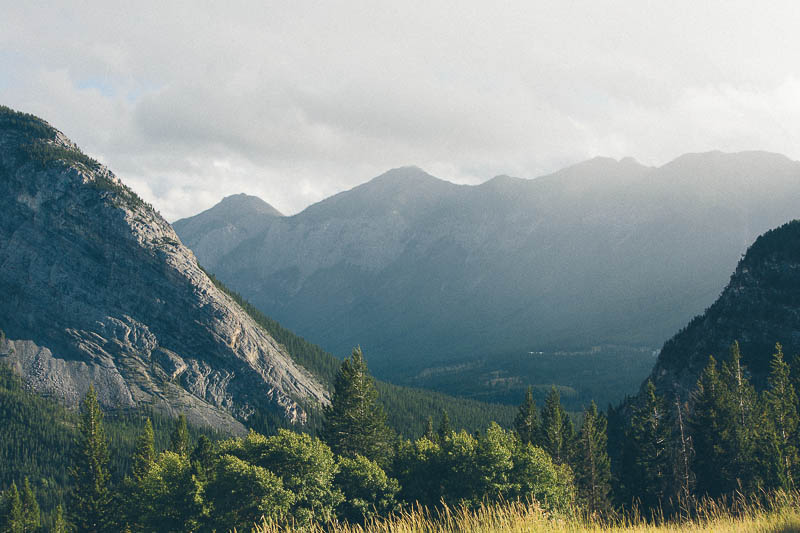 After a few short hours of driving, we reached an expansive valley and saw the town of Banff in the distance, nestled against a cluster of mountains. We caravanned our way through the impeccably picturesque downtown, where the streets were packed with vacationers, and headed towards Banff National Park's Tunnel Mountain Campground. 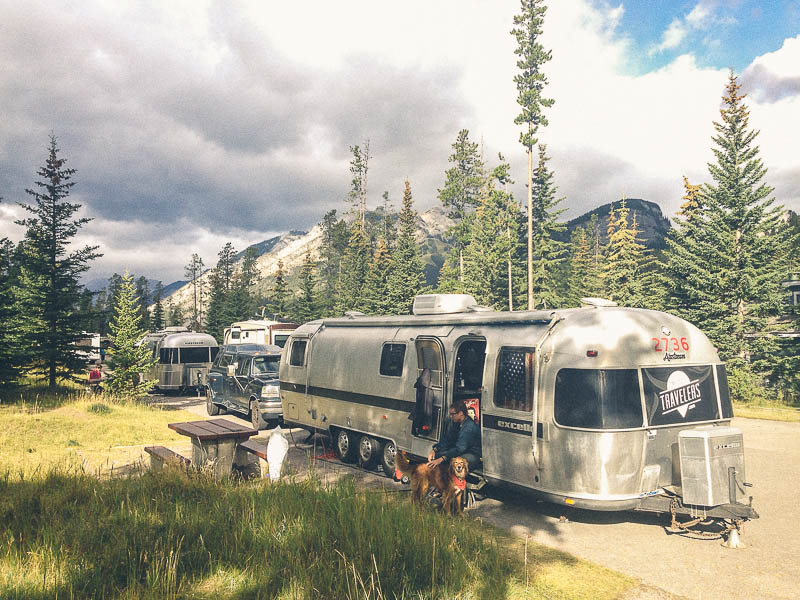 The campsites at Tunnel Mountain were definitely one of the more unusual: we had to parallel park into our campsites. Not so difficult with a car, but trying to parallel park a 34 foot trailer that never wants to go where you want it to - not exactly easy. We settled in, with AdvoDNA behind us, MaliMish and 1337Stream across the grass from us and Aluminarium, Weaselmouth, Riveted and Watsons Wander further down. We finally got to meet Kyle of Where Is Kyle Now?, who had arrived in Banff a few days earlier. Kyle has spent the last five years traveling solo in his 23 foot Airstream and has been to 49 states and 10 Canadian provinces. He's played golf in every single one - his version of crossing it off the list. 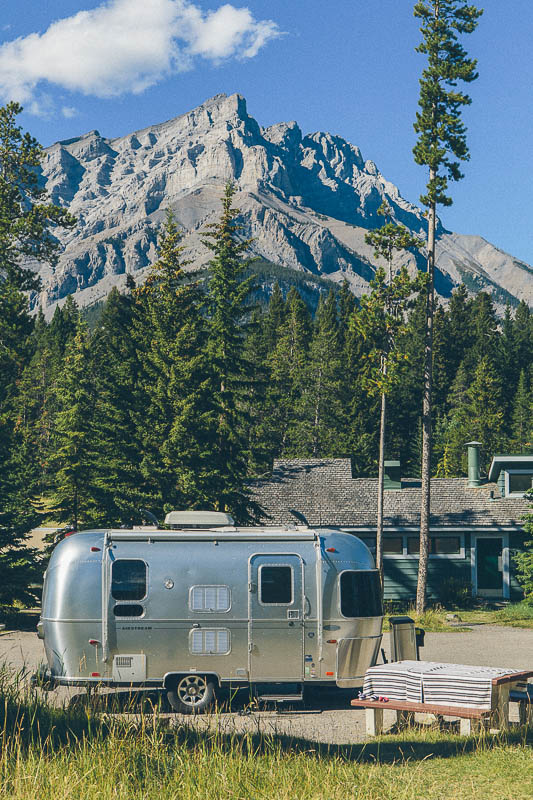 The next morning, we woke up early with plans to explore Banff National Park's most popular attraction: Lake Louise. Someone in the group had heard that there were two alpine teahouses perched high above the lake that you could only get to by hiking there. Where else can you end a hike with a hot cup of tea and an incredible view? 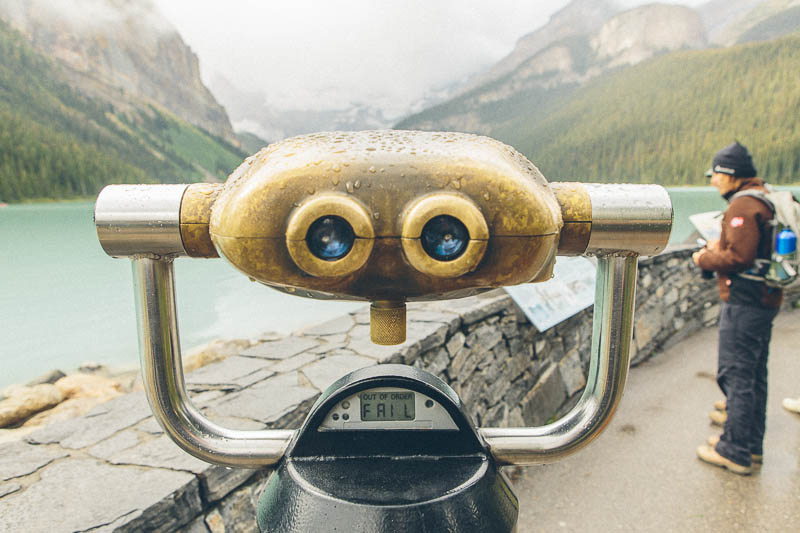 While Lake Louise is not particularly close to the town of Banff - it's about 60km (about 40 miles) north - it sure is popular. We could barely find a parking spot. The actual lake is just a short walk from the parking lot and was crowded with tourists. But once we saw the lake's opaque, brilliantly turquoise water with steep mountains and glaciers surrounding it, we understood the draw. It was breathtaking. 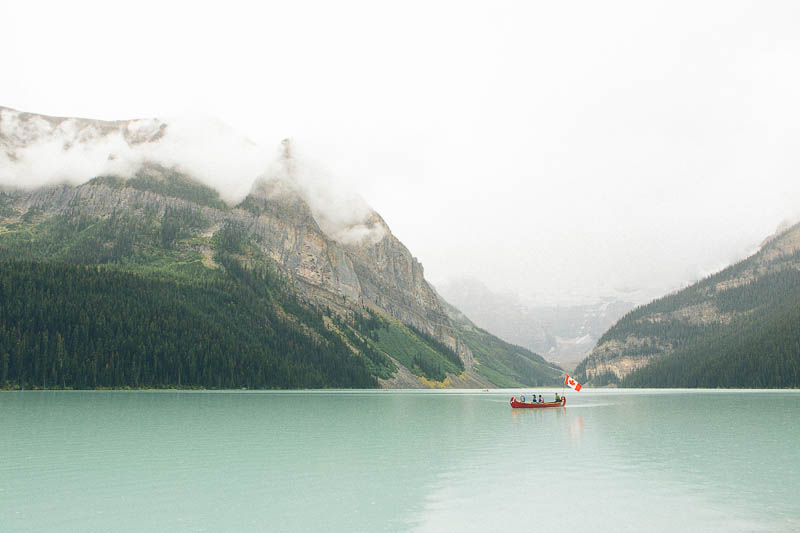 A canoe sporting a Canadian flag on Lake Louise

We joined up with Aluminarium, Riveted and WeaselMouth and found the trail that leads up the surrounding mountains to the Lake Agnes Teahouse. It was mostly switchbacks through dense piney forest, but every now and then we'd get a glimpse of the glacial blue waters of Lake Louise way down below. 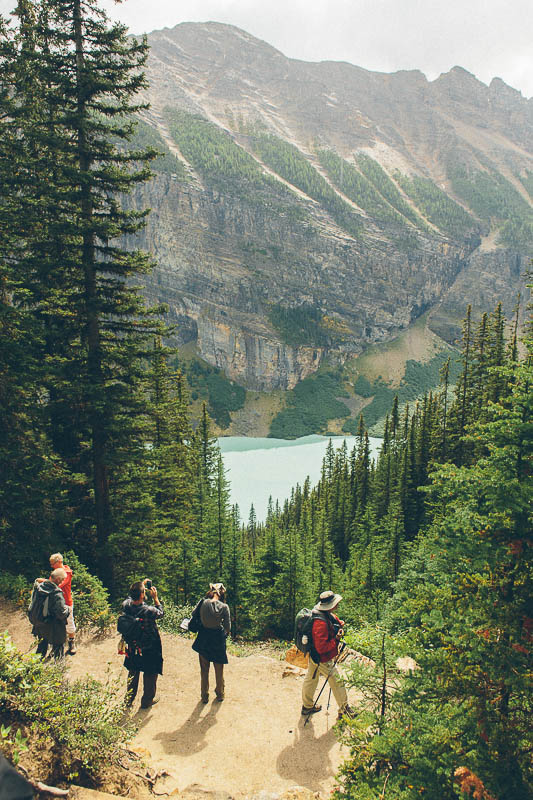 Catching a glimpse of Lake Louise waaay down below

After what seemed like a never-ending hike (2.1 miles with a 1263 feet elevation gain!), we were finally rewarded with amazing views and the cutest little wooden teahouse perched next to a small lake. It was like an oasis in the middle of the desert - after an exhausting hike, a warm meal was going to hit the spot. 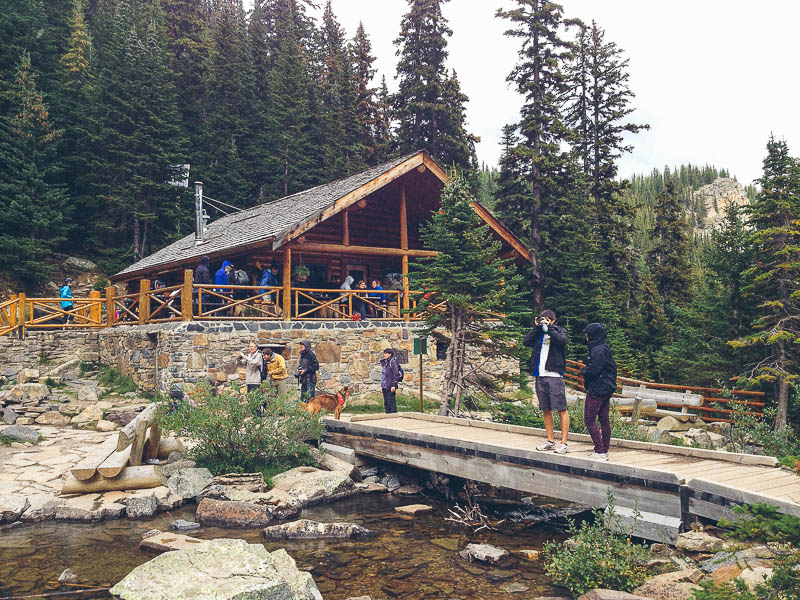 We crowded around a small table and had an incredibly satisfying lunch of lentil soup, tuna sandwiches and a couple of gigantic chocolate chip cookies. Once we felt like humans again, we struck up a conversation with the young dreadlocked waitress who told us that she, and everyone else working there, hike to work every day. Crazy! That's one hell of a commute! 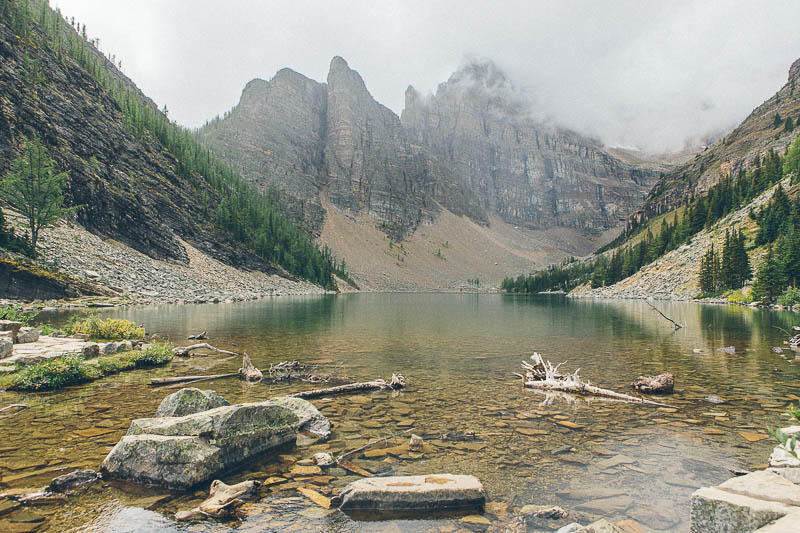 Our lunchtime view of Lake Agnes from the teahouse

The group that we hiked up with, plus WatsonsWander, decided to hike another 6 miles to the second teahouse, Plain of Six Glaciers. We didn't think we had another 4 hours of hiking in us, so we headed back down the mountain with Dave, Ann and little Wynne. 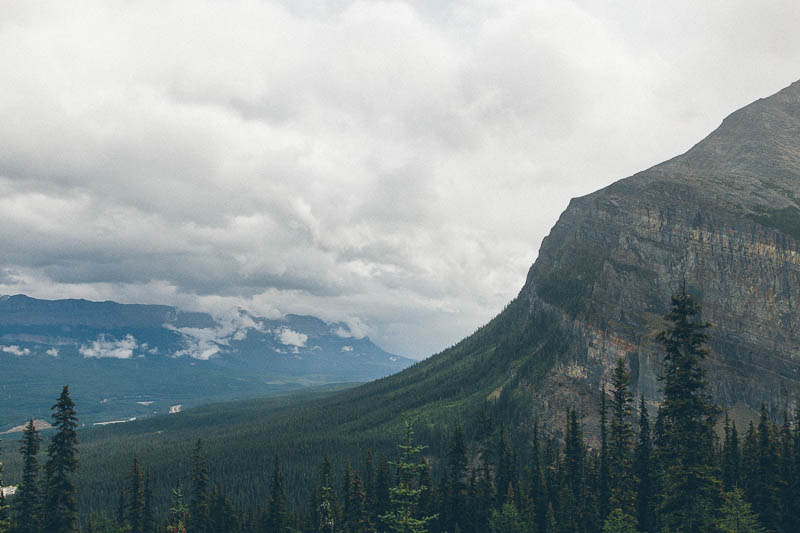 View from the top

We were about halfway down, when it started pouring rain. Freezing rain. There wasn't much shelter besides the pine trees lining the trail, so we just put on our rain jackets and kept on trucking. As fate would have it, it stopped raining just as we reached the end. 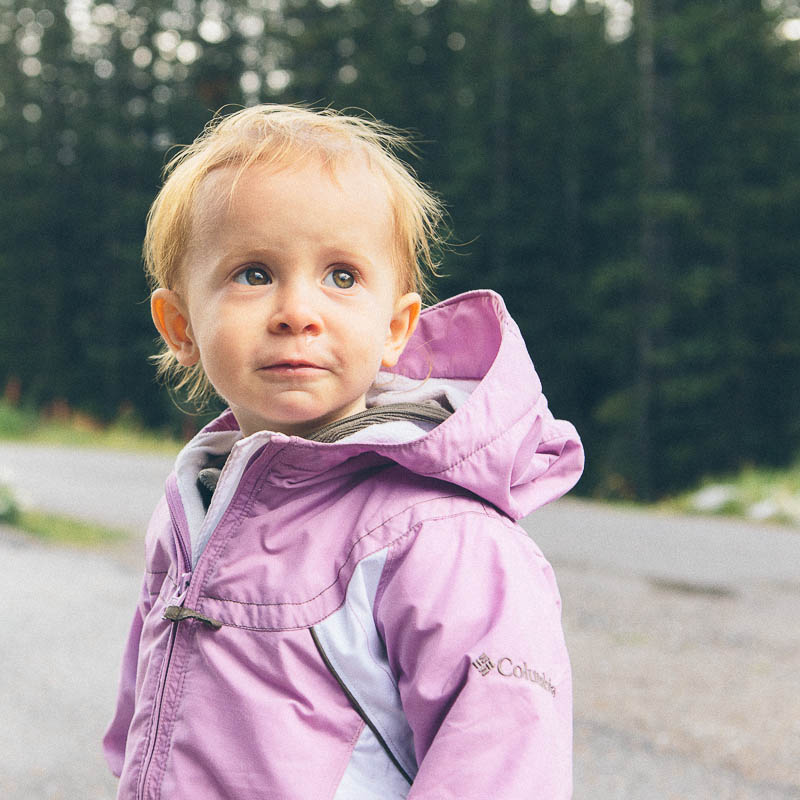 Wynne after the hike down: happy as a clam and cute as a button

We headed back to camp to warm up and were greeted by the Wandr'ly crew, who had arrived that morning. Nathan and Renee have been living the nomadic lifestyle for nearly 6 years and travel around the country in a sweet 70s Airstream with their three awesome kids, Renee's mom and their chocolate lab. Nathan, a writer and web designer, runs a pretty comprehensive online travel magazine that shares their years of knowledge on life on the road. 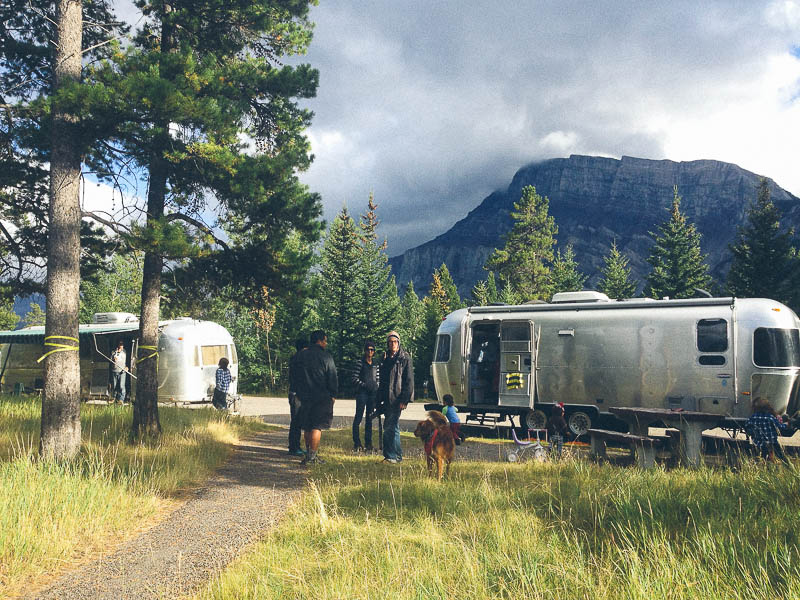 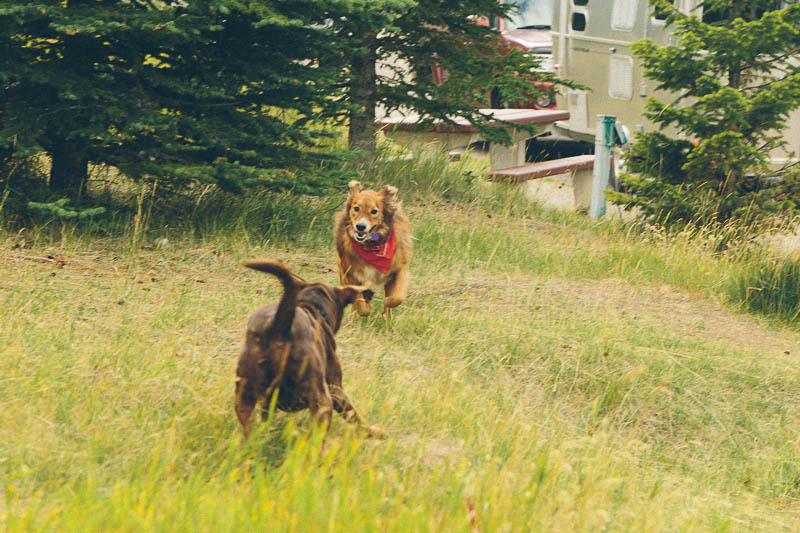 Bulleit and the Wandr'ly pup playing

The next day was the last of our Airstream caravan before our traveling neighborhood would disperse. It was like the last day of camp. So we made the most of it. 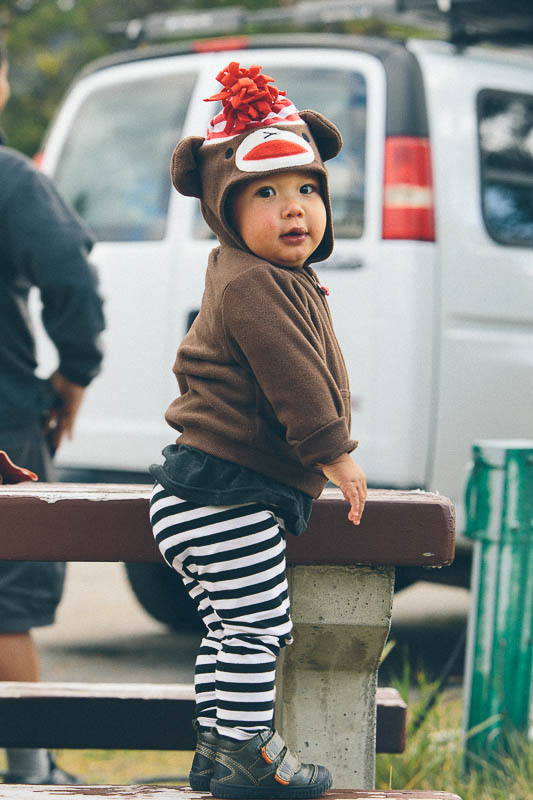 How can you say no to that face?

As "non-breeders", we hadn't spent much time with the "breeders" and their little ones, so we decided to join MaliMish, the Works family and the Wandr'ly crew for a hike to the top of Tunnel Mountain. 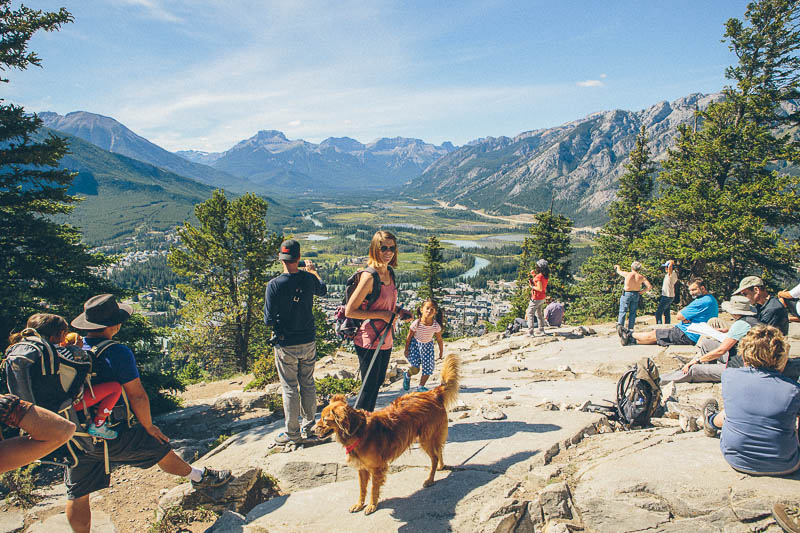 The gang at the top of Tunnel Mountain

Just outside of downtown and not too far from our campground, the hike is just around 3 miles round trip and the summit has amazing views of Banff and the surrounding valleys. 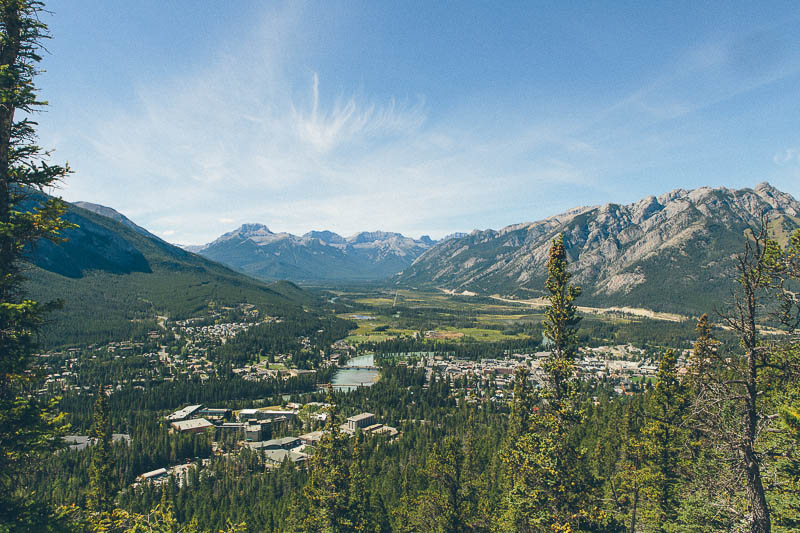 The town of Banff down below 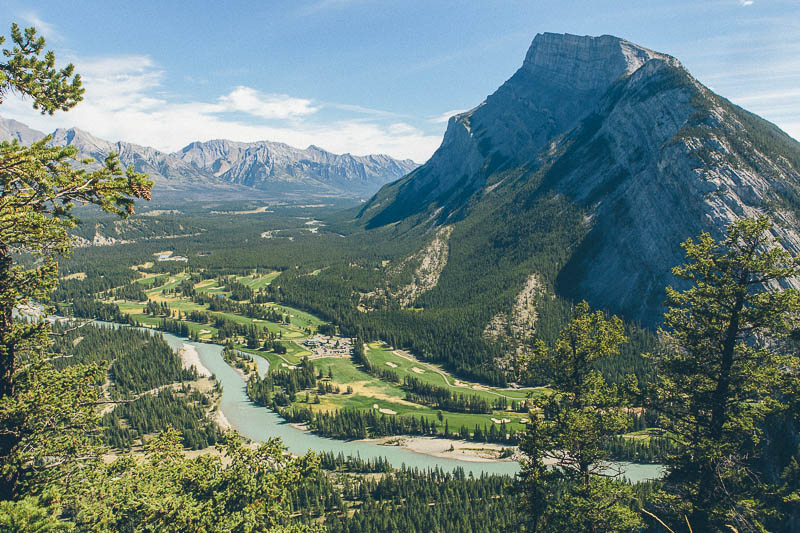 Now, I have to give all these kids major hiking kudos. Granted, they all live a pretty active outdoor lifestyle, but between 7 kids ranging from the one to twelve years old, there was a surprising lack of complaining. Parents: you are doing something right. 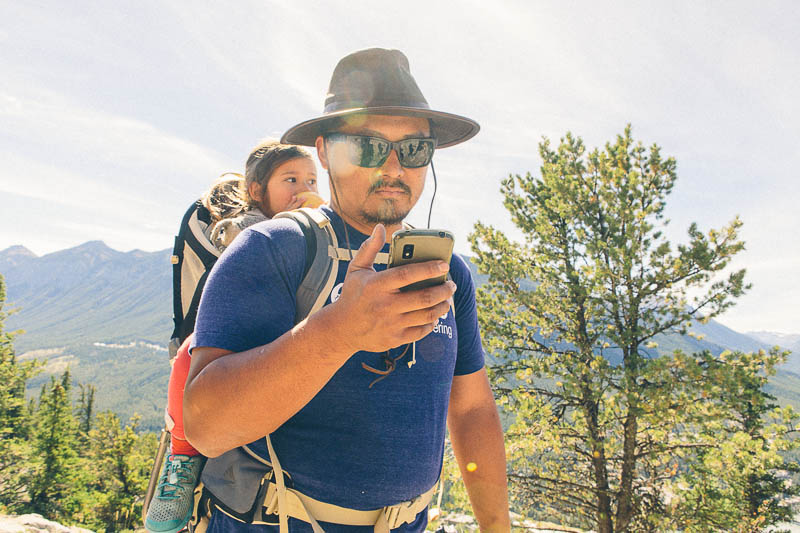 After an awesome hike and getting to know the Works, Wandr'ly and MaliMish a little better, everyone reconvened at the campground for our last happy hour and evening together. We all gathered around a picnic table with cocktails in the late afternoon, plotting future adventures and brainstorming wild business ideas we could hatch together. 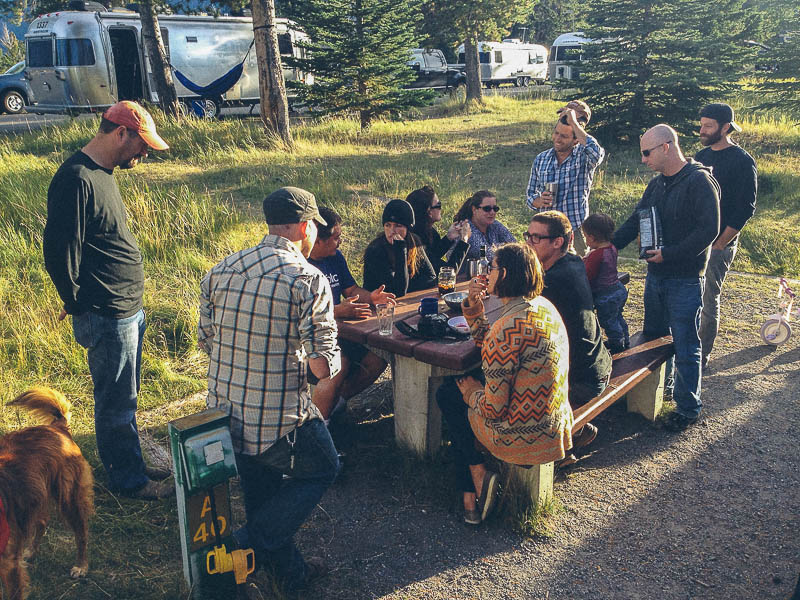 When the light was just right, John called the whole gang over to a picturesque field where we took a series of group shots to commemorate Aluminogan 2013. 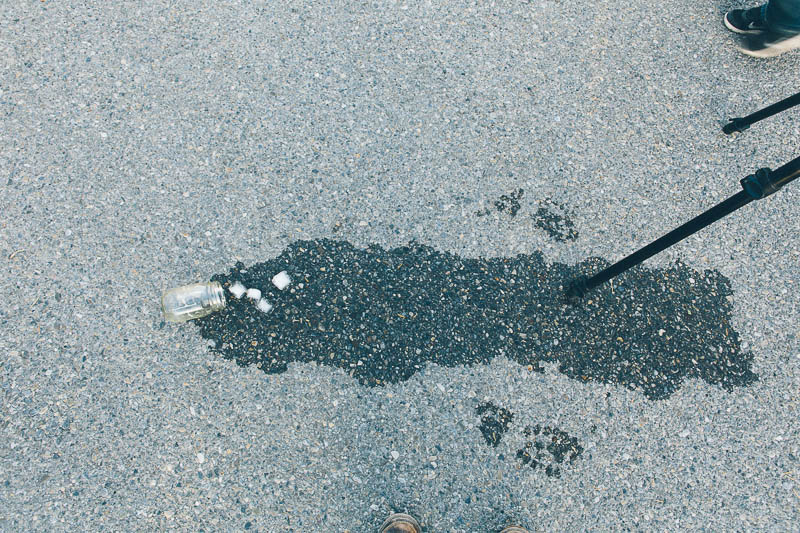 John maybe had one too many before snapping the group shot. The remains of his spilled cocktail.

I don't want to get all sappy, but our Canadian Caravan was probably the most memorable week of our entire year on the road. You know how they say that "happiness is only real when shared"? Well, happiness is way more fun when you share it with nine traveling Airstream families. 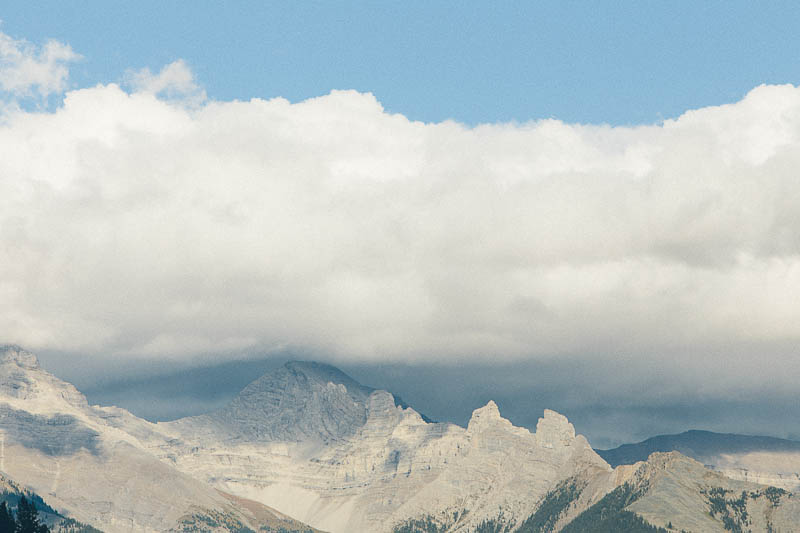