August 5, 2013 by Laura Preston for The Front Page

Seattle was one of the few resting points of our trip. We made plans to stay with John's brother and wife, who live well outside of the city on a five acre parcel of land. John needed to give Loretta and B.B. some much-needed TLC and I was flying to the East Coast for a family reunion. 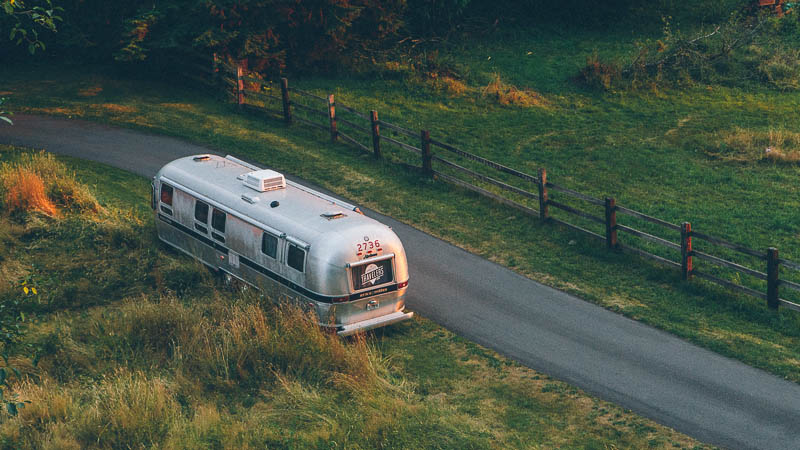 Over those two weeks, we spent most of our time at the house. John and his brother made frequent trips to the local hardware store to get supplies for truck and trailer improvements. Sherry and I hung out around the house, getting to know each other over glasses of white wine and our mutual love of cooking. Bulleit made friends with their German Shepherd and finally learned how to chew on sticks and chase tennis balls. I was a little worried we had adopted a dog that didn't know how to be a dog... 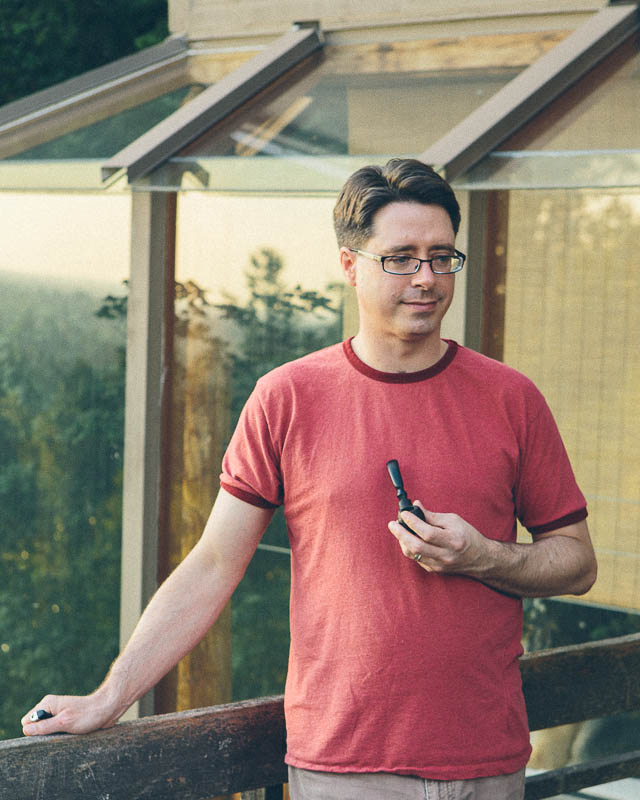 Toby being classy with his pipe

I have to tell you, Toby and Sherry's house is AWESOME. It's a large, three-story cabin with tall ceilings, raw cedar planked walls and floor-to-ceiling windows that look out over the forest below. They have an incredible deck that is positioned perfectly for watching the sun set over the Olympic Mountains off in the distance. It was all very Pacific Northwest. And they found it on Craigslist! 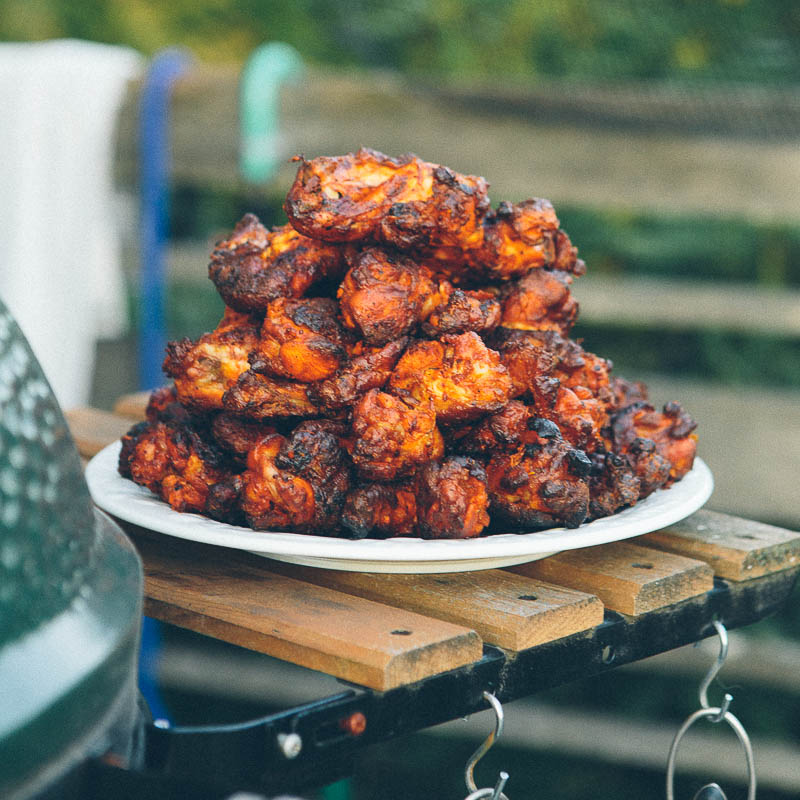 Every night, Toby cooked dinner on the grill out on the deck while we all sat around, drinking craft beers and polishing off bottles of wine, talking about the state of the world and watching the pups play together. 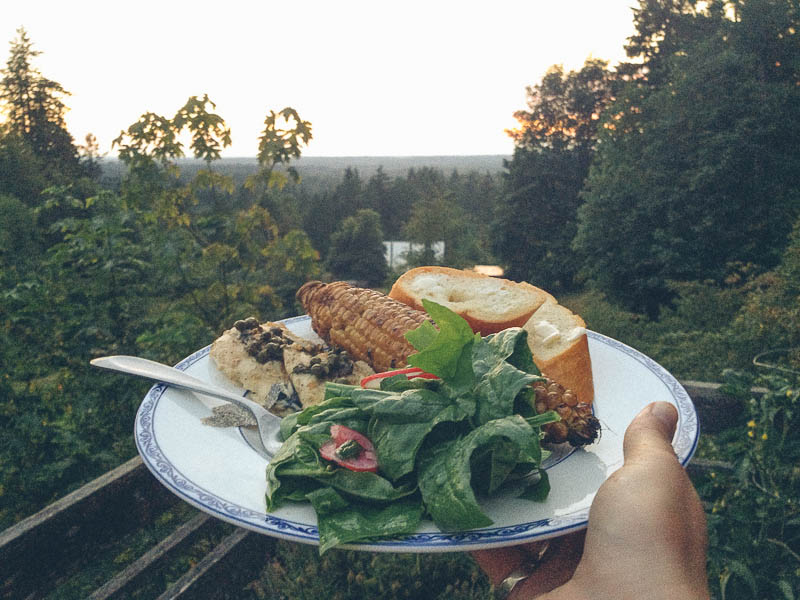 One of many delicious meals on the deck 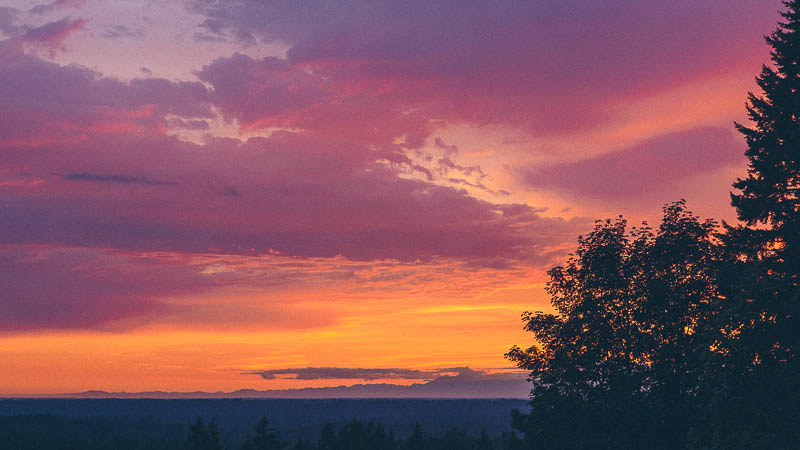 The one day we did spend in downtown Seattle was pretty excellent. We parked near Toby's office, which happens to be in the basement of the beautiful and recently renovated Union Train Station. We walked from there, along the wharf with all its touristy seafood restaurants and souvenir shops, towards Pike Place Market. 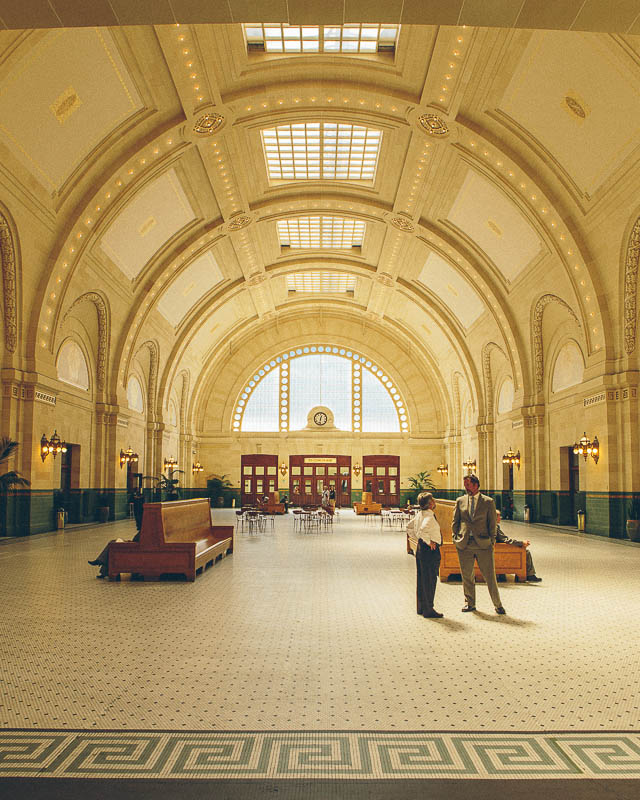 Crowded and bustling, Pike Place Market stretches across multiple blocks and buildings and offers fresh seafood, produce and flowers, alongside eateries, bakeries and cheese shops. And pretty much everything else food-related. It was foodie heaven. I would have wandered around all day if it weren't for the boys. 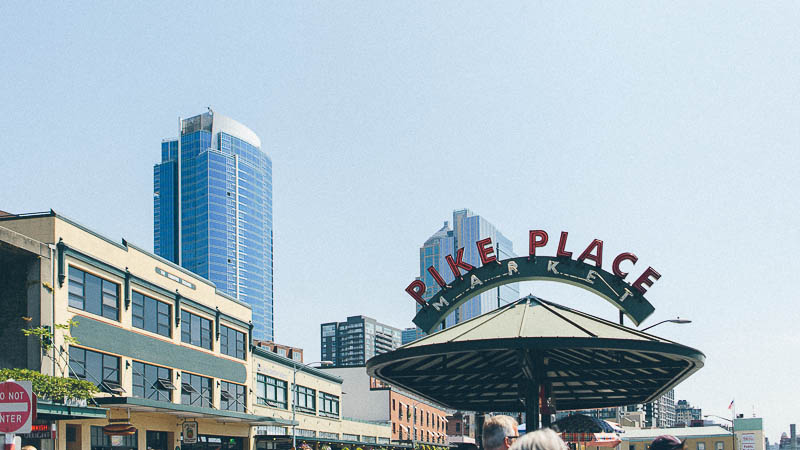 We walked by the ridiculously long line winding outside of the very first Starbucks with no desire to stand in line for an hour to get a Venti Caramel Macchiato. 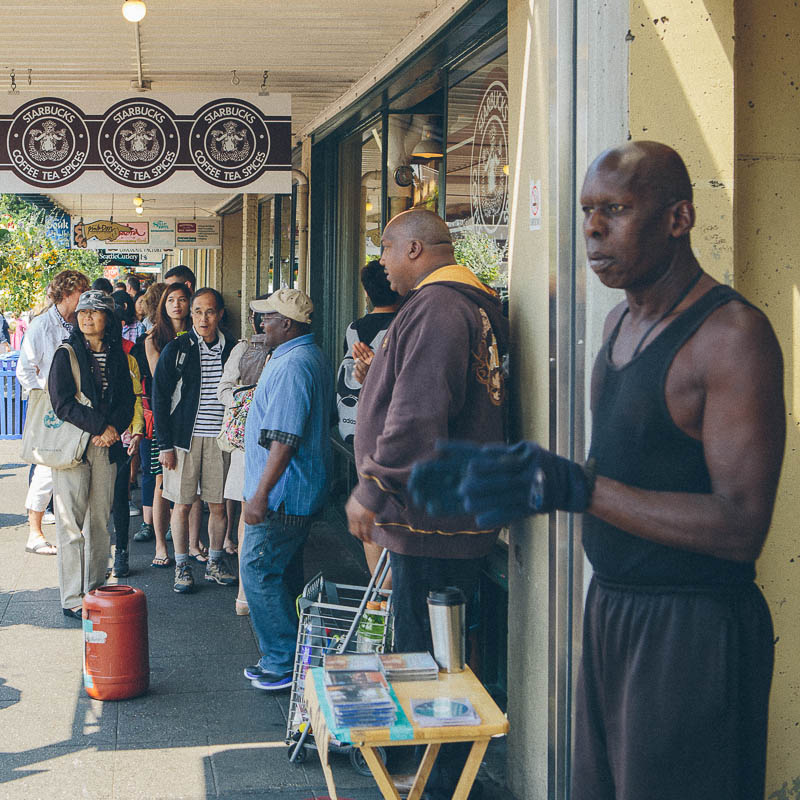 The line outside of the OG Starbucks

Instead we found an empty little diner on one of the lower levels of the market. After a hearty Salmon BLT for lunch, we explored the busy market, picking up some fresh trout, some local greens and corn and a freshly baked baguette for dinner. We continued through the market, watching fishmongers toss fish over their heads, yelling back and forth. 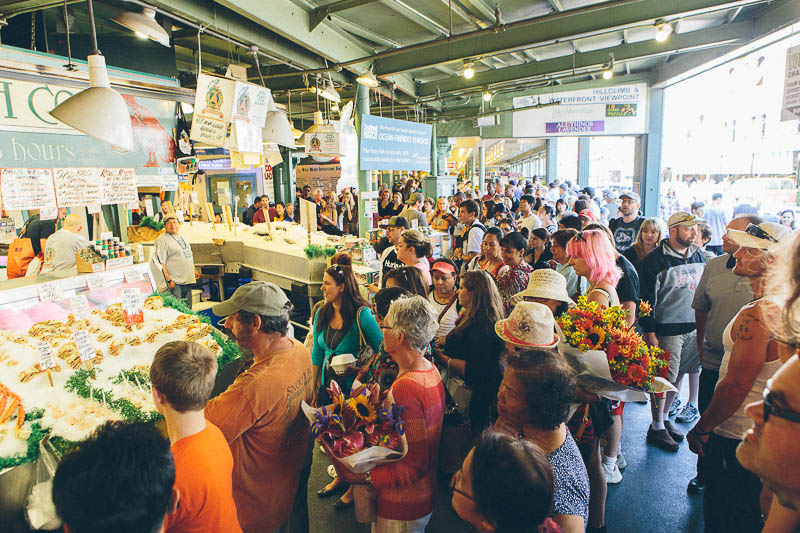 Pike Place Market also has a surprising amount of flower stands. The older Asian women who run the stands pluck every imaginable flower from buckets and create these incredibly beautiful bouquets. The best part: super insanely cheap. Like grocery store flowers cheap, but excellent quality. John, being the sweet and thoughtful boyfriend that he is, bought me a bunch of pastel sea-lavender. 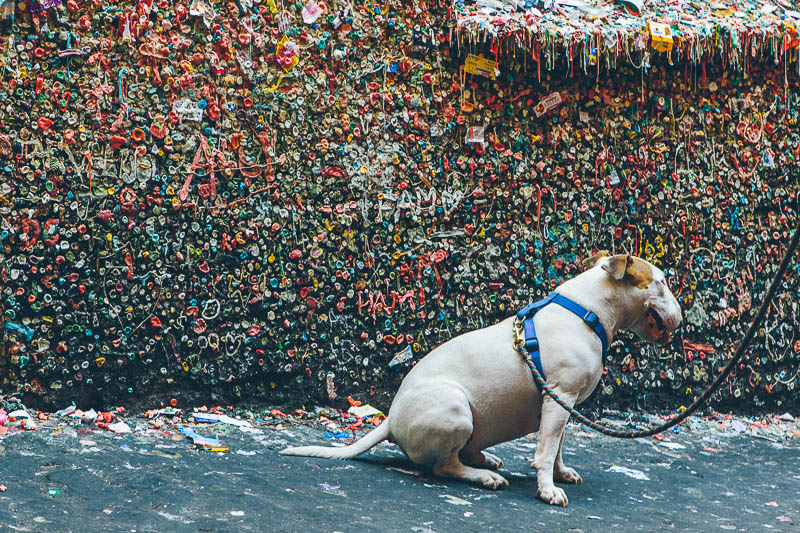 We walked through a covered alley and were suddenly at the strangest tourist attraction: The Gum Wall. It is what it sounds like - a brick wall covered in chewing gum. People were crowded around, taking pictures of each other posing in front of the sticky, sickly-sweet smelling wall. Quirky, but not exactly charming, I wasn't sure exactly why people were so excited about this place... 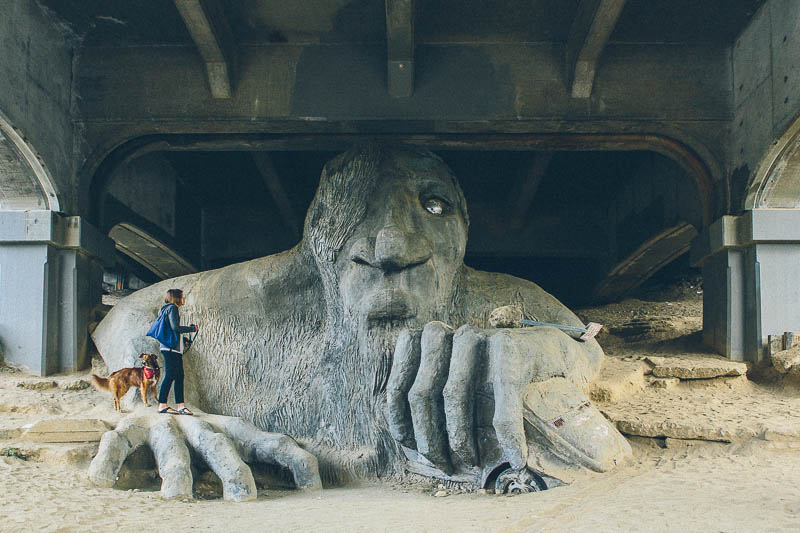 A few days later, we drove into the city to do some more exploring. Like any good tourist visiting Seattle, we had to stop at the Fremont Troll for a photo-op. Designed and built by a group of artists in 1990, this large stone troll dwells under a bridge in the hip Fremont neighborhood. Not particularly exciting, but still pretty awesome to see, we took our requisite pictures and left. 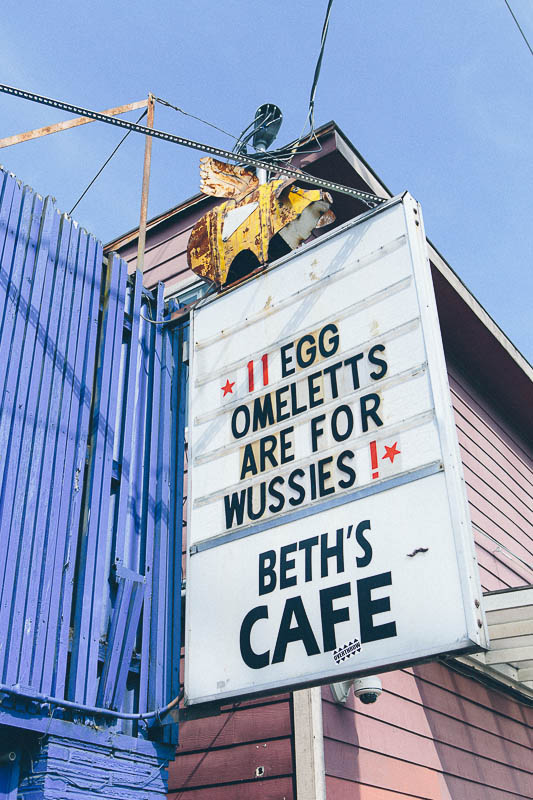 I would say that most people are probably wussies then

We drove over to Beth's Cafe with rumbling tummies for some greasy spoon diner grub. This place has been around since 1954 and is famous for their 12-egg omelette and all-you-can-eat hash browns. 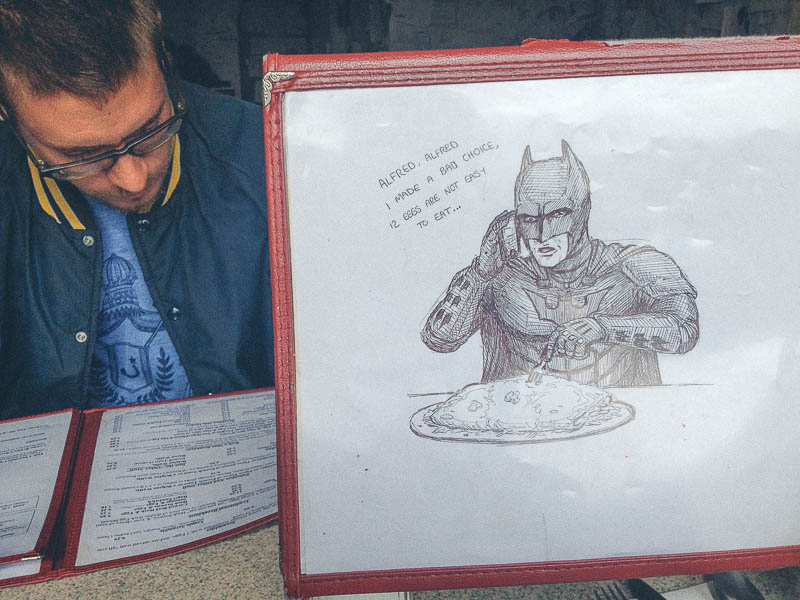 All the menus have customer-created artwork on the cover

Although not quite hungry enough for a 12-egg omelette (…who ever is?), I settled on a heaping pile of hash browns, topped with a biscuit, sausage, eggs and sausage gravy while John satisfied his sweet tooth with a waffle, two sunny eggs and bacon. 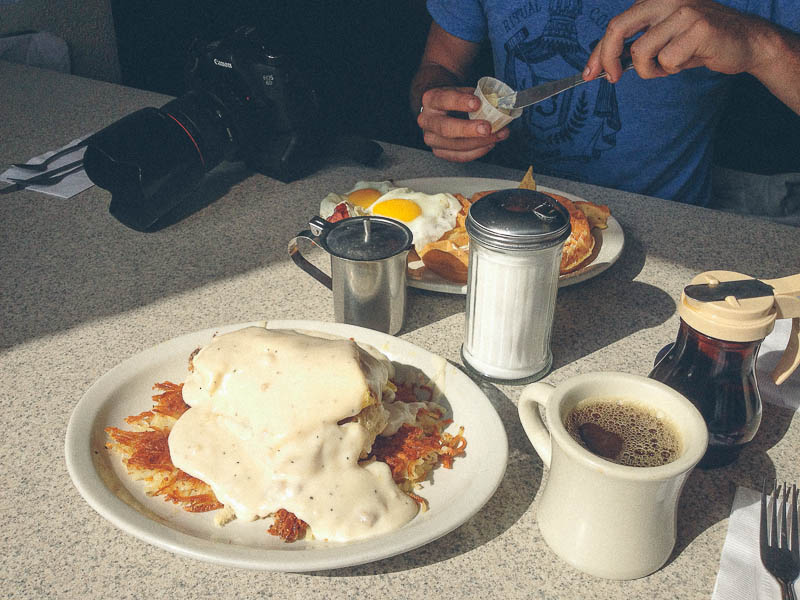 Heart attack on a plate

We should have just gone with the 12-egg omelette…I think it would have been less food. We powered through as much as we could, but had to give up half way through. Too much food. Way, way too much food. 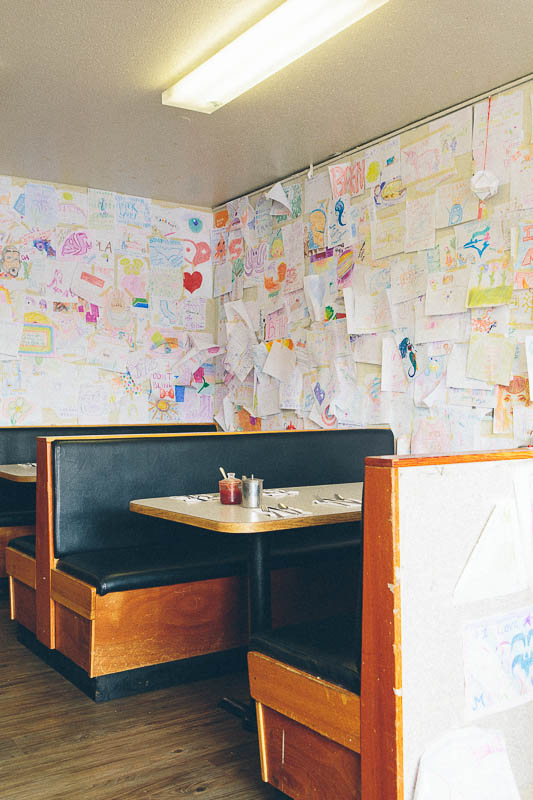 The walls of Beth's Diner are completely covered with art work made by their patrons. There was some awesome stuff. There was more weird stuff...

While I was away on the opposite coast at a Preston family reunion, John and Toby got to work on the trailer. 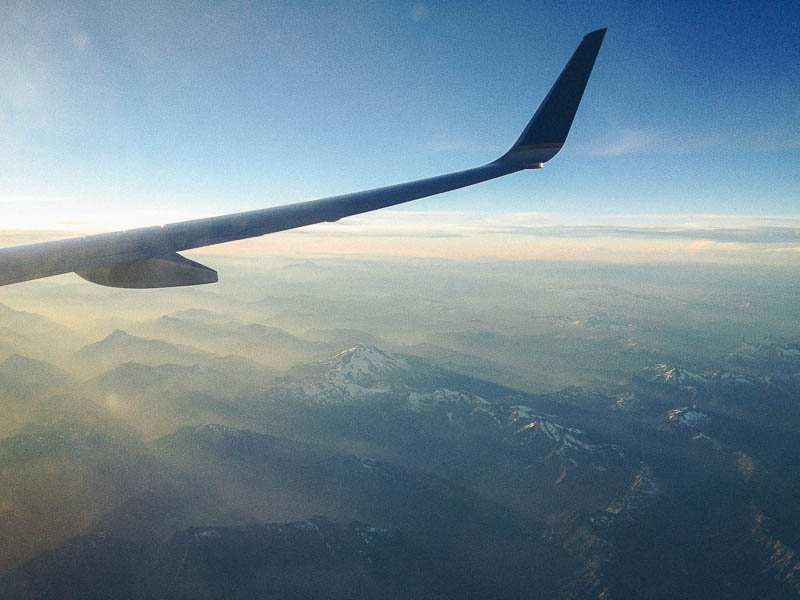 Flying back to Seattle over the Cascade Mountains

I returned five days later and they had removed the broken fridge, replaced all four stabilizer feet, switched the car stereo with the trailer stereo, had new rear tires put on the truck, removed the entire cracked and faded blue stripe and repainted it with a matte black. And probably ten other things. 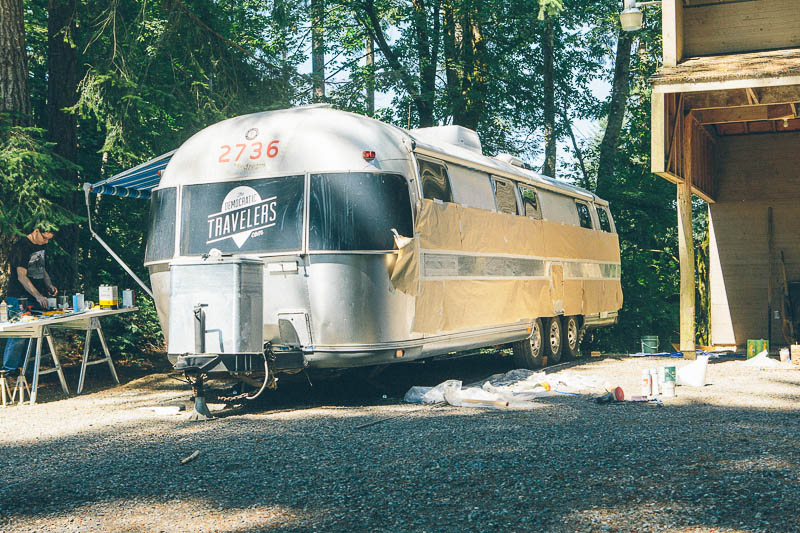 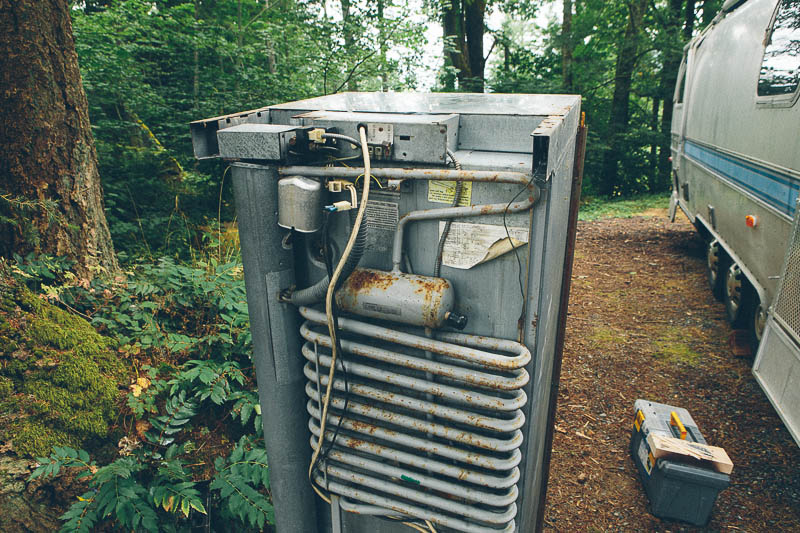 Our busted fridge headed to the dump

I came to a whole new trailer. It was awesome. Thank you Toby, for spending your two weeks off helping John with home improvements. Obviously, thank you John, for being awesome. And thank you both for being so darn handy! 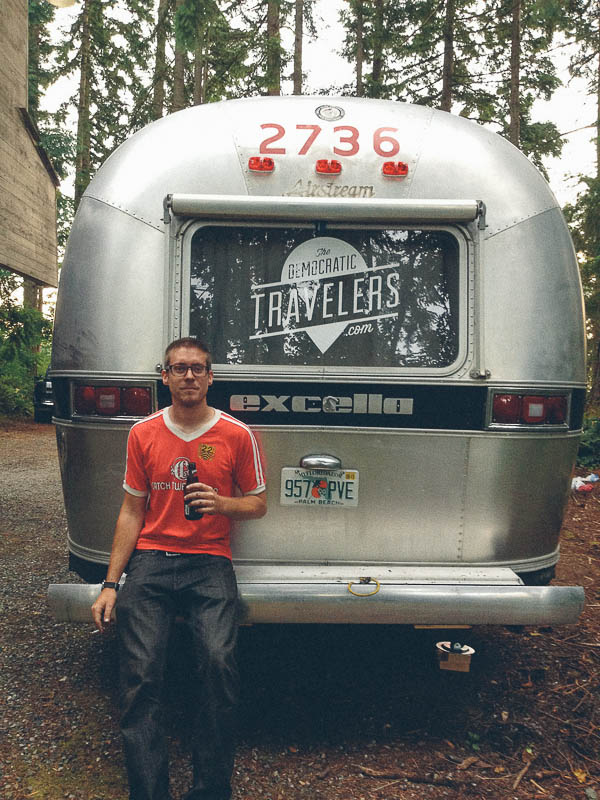 Celebrating after a long week of hard work

Once I returned to the West Coast, it was time to do some real camping (not this "glamping" business) in the San Juan Islands. Stay tuned… 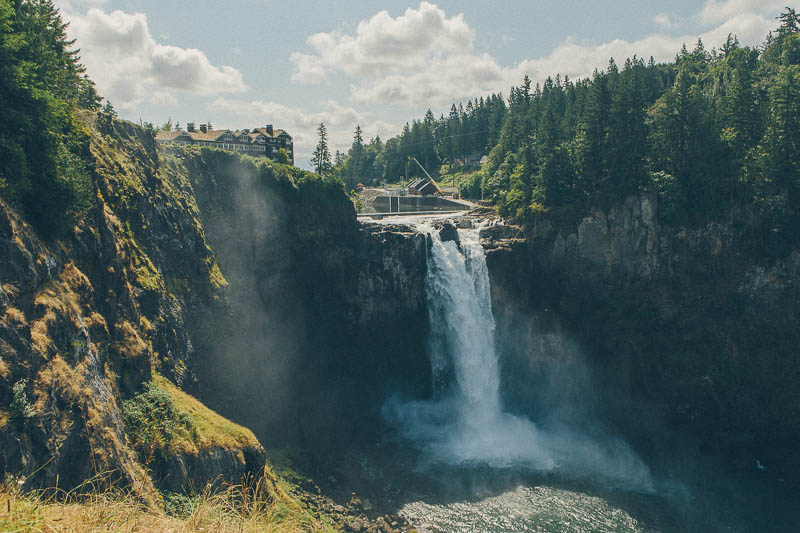 Oh yeah, and we made a quick stop at Snoqualmie Falls. Twin Peaks fans - look familiar?

Special thanks to Chris G. (who suggested Observe and marvel and Our Famous 12-egg omelette, and "all you can eat" hash browns . ) and Dustin D. (who suggested Watch out for flying fish!) for making this blog post possible!