Portland, OR You Can Hike to a Waterfall and Eat Your Bleu Cheese Ice Cream Too

Portland started out disastrously. We pulled into our campground on banks the Clackamette River, exhausted and cranky from a long day of driving, and found ourselves locked out of the Airstream. Our door handle was already broken and we had been making do with prying it open, but the spring mechanism had finally given out. With no idea of how to remedy this problem, I called the nearest RV dealer, which happened to be the biggest Airstream dealership on the West Coast. They told us to come on over to see what they could do. Double-luckily, it was only a mile down the road. 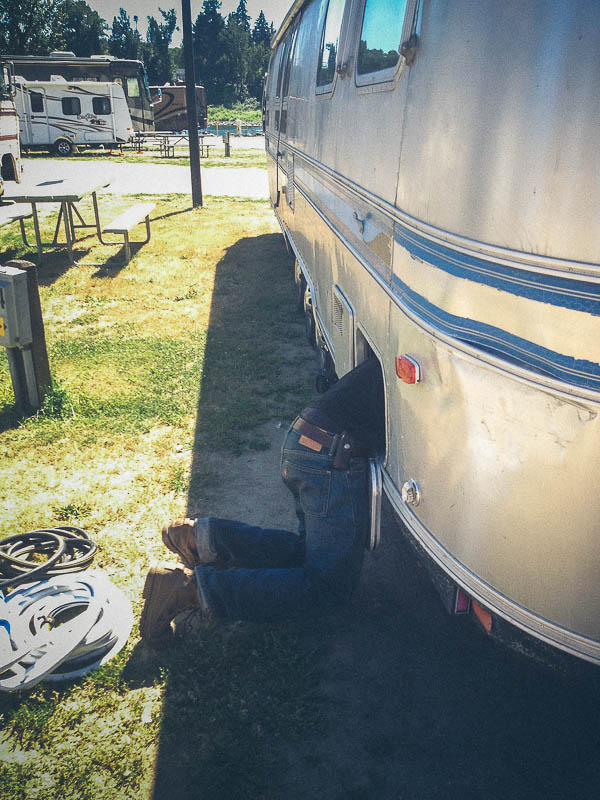 Before we went to the dealership, John tried to climb in from the outside. There was no way.

Triple-luckily, we made it just before they were closing for the day. Two friendly service guys delivered the bad news: they would have to drill the lock out. After jimmying one of the windows open with a coat hanger, one climbed in through the bathroom window. The other grabbed a circular saw and drilled a golfball-size hole through the aluminum. We got in, but we were stuck with a giant hole in our door. 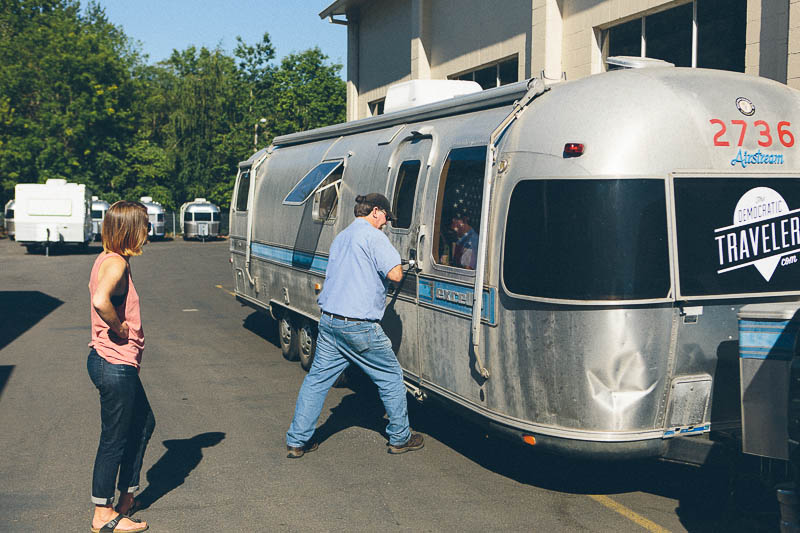 Drilling a giant hole in our door...yaaaaaay...

The rest of our week in Portland was a lovely summer's breeze. We headed downtown one morning to get our Voodoo Doughnut fix. Once we found a parking spot (it's a complicated ordeal in every big city), we took our spot at the back of the 30+ person line that snaked out of Voodoo's famous hot pink front door. I knew this place was popular, but I didn't realized we'd have to wait half an hour to score a doughnut. But if I've learned anything from living and spending time in big cities, the longest lines for food are usually worth it. 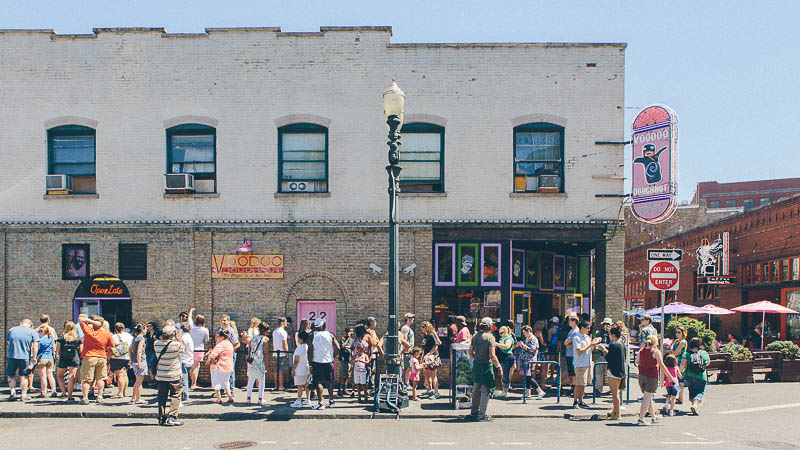 The line outside of Voodoo Doughnut

After some entertainment from a handful of colorful locals who truly upheld "Keep Portland Weird", we finally made it inside. One Maple Bacon Bar, one Ole Dirty Bastard, and a Cap'n Crunch Doughnut please! They threw in an extra Dirty Bastard and a Voodoo Doll. Because clearly, we didn't have enough doughnuts. 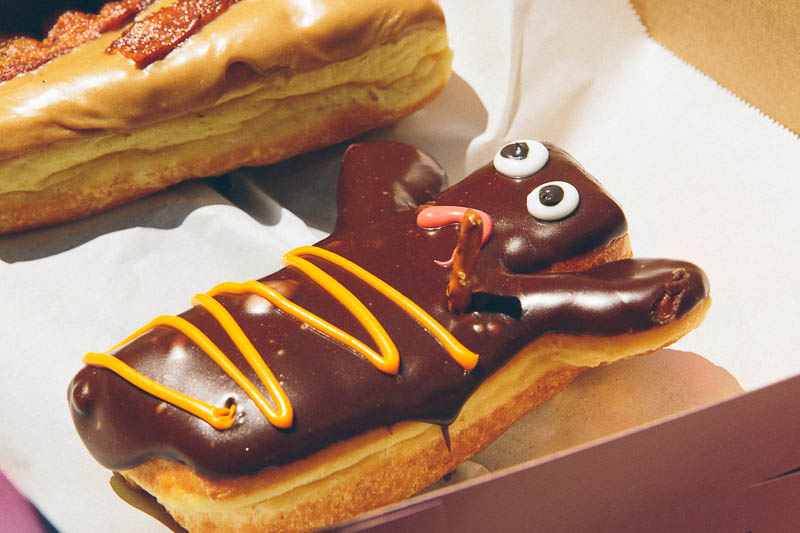 We made our way through the crowds to a picnic table where we scarfed down our giant sugar-bombs. After one-too-many bites and an onset sugar-high, we sluggishly walked off our fullness around a few random blocks of downtown Portland.

And then it was time for our weekly dose of culture: The Japanese Garden. We were looking forward to an overwhelmingly beautiful and elaborate Japanese-style botanical garden. But because neither of us had ever been to a Japanese garden, we really had no idea what to expect. After hiking up 200 steps to get to the entrance, we knew it had to be worth it…right? 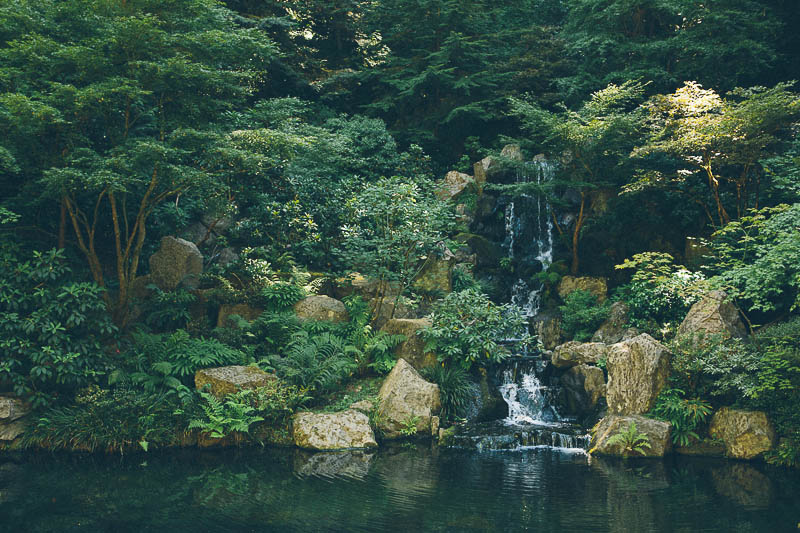 Strike one: $10 per person to get in. Grumble grumble. Fine. We payed our dues and entered Japanese garden land. We walked along prescribed paths through carefully manicured shrubs and along babbling brooks and small gardens with pagodas popping up here and there. After a quick twenty minute stroll through all five acres, we had seen everything. 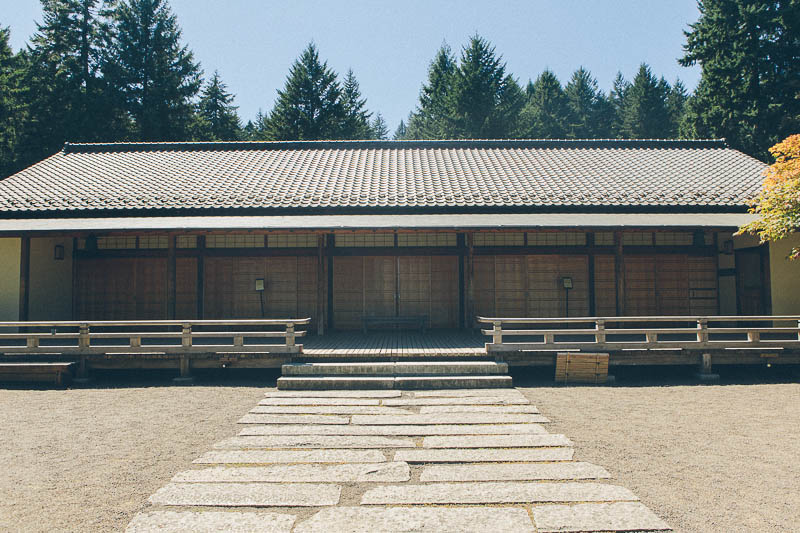 Designed by one of the most important Japanese landscape architects of the 20th century, the Portland Japanese Garden has been consistently praised as being one of the best and most authentic Japanese gardens in the world. I have no doubt that it's a fantastic garden, but it just felt like walking through the forest. We learned that Japanese garden aesthetics were very naturalistic, subtle and harmonious but our over-stimulated, flashy Western sensibilities were underwhelmed. I blame it on the doughnuts; they weren't making us feel very "zen". 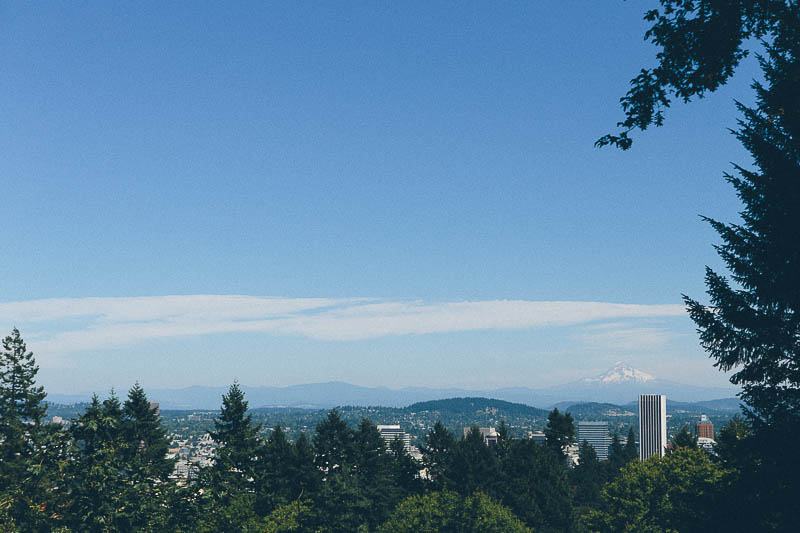 At least there was a nice view!

In need of more stimulation, we headed across the street to the International Rose Test Garden. This was my kind of garden. With 7,000 rose bushes boasting 550 different and unique varies of roses, the fragrant scent and colorful blooms were intoxicating. 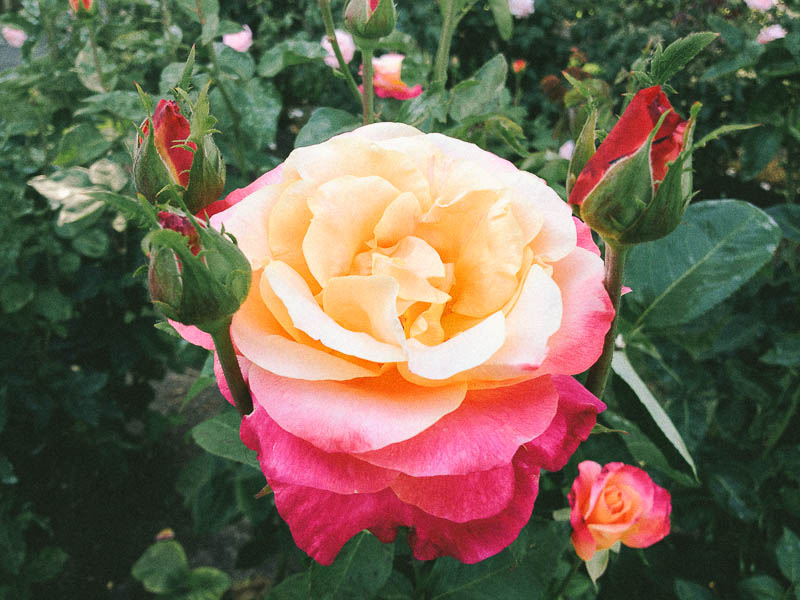 One of my favorites

I wandered down every single aisle, stopping to smell the roses and snapping photos of the most exquisite and unusual varieties. Some were as big as my head! John was not quite as enamored with the garden as I was. And now I know why Portland is known as the "City of Roses". 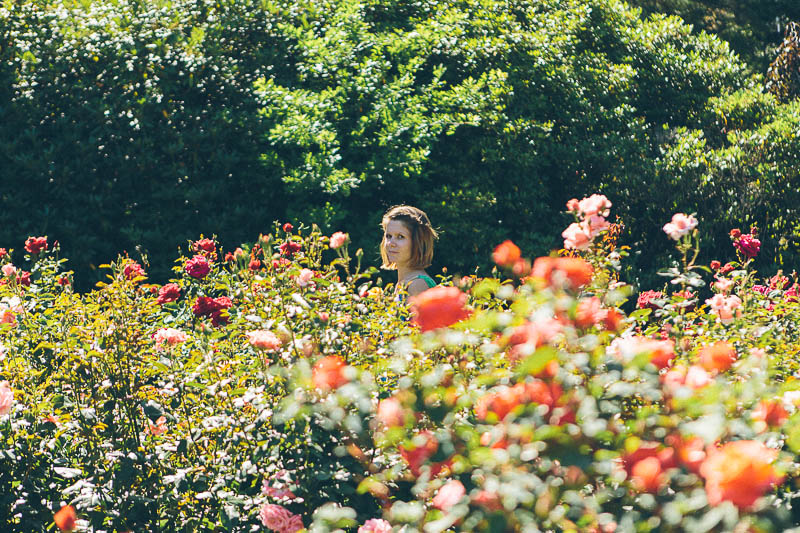 A few days later, John's friend Chris, his wife Caitlin and their pup picked us up early in the morning to drive alongside the Columbia River to visit Multnomah Falls. As the tallest and most visited waterfall in Oregon, Multnomah Falls cascades 620 feet down two tiers, with a stone footbridge spanning across the top of the lower falls. 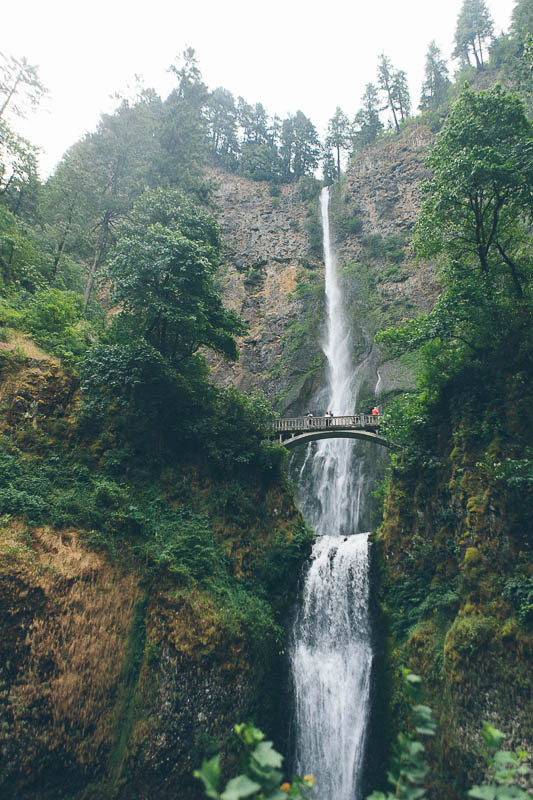 We got there mid-morning and already the viewing area was milling with tourists. We made our way up the trail and across the crowded footbridge, ducking underneath cameras all taking the same picture. We were going to hike to the top of the falls.

My initial excitement of a short 1.2 mile hike to the top of a waterfall was quickly extinguished when I learned it was 600 feet in 1.2 miles and the trail had signs that counted down the switchbacks to the top. There was something ridiculous like 13 of them. Chris, an avid runner, was practically bounding up the switchbacks while I realized how out of shape I was, huffing and puffing with every step. One million switchbacks later, we made it to the top and peered over the edge. The views of the tiny tourists down below and vistas of the epic Columbia River Valley were totally worth it. And I didn't die! 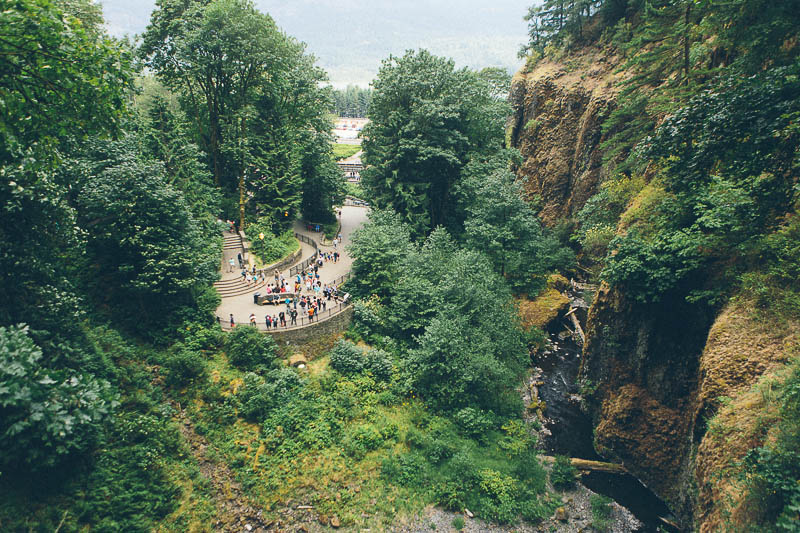 View from the top of Multnomah Falls

Our jello-y legs carried us back down the trail as we worked up a mean appetite. We continued along the Columbia River, headed east to Hood River, the windsurfing capital of the world.

Lunch was a well-deserved pizza with craft beer to wash it down at Double Mountain Brewery. We sat outside in the warm sun, exhausted but happy and satisfied. After the pizza was gone and the pint glasses empty, we walked over to the Columbia River to watch the windsurfers and kite surfers weave between one another. 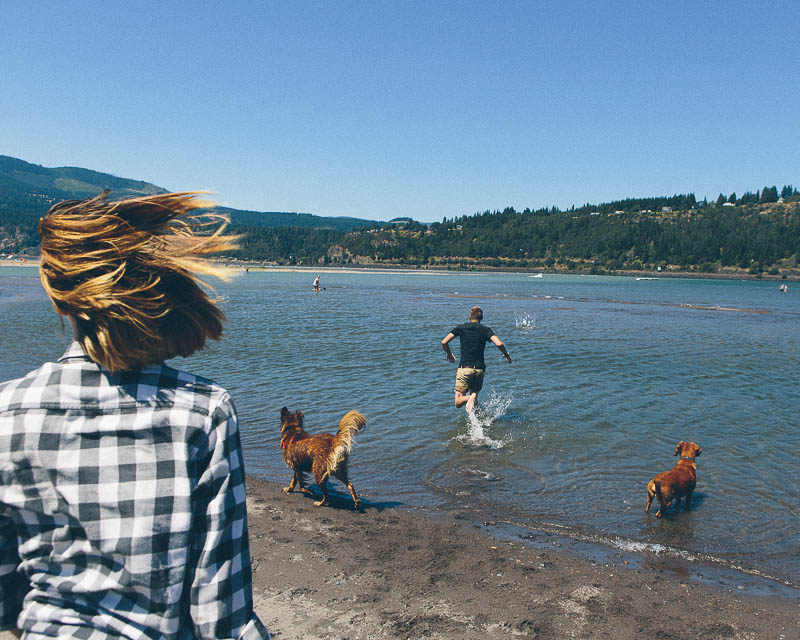 On our way home, we stopped at the ultra popular Salt & Straw ice cream shop to try some crazy ice cream flavors. Chris and Caitlin warned us that there was usually an insanely long line, but when we got there, there were only a few people in the shop. Completely dumbfounded at the list of flavors, the friendly ice cream shop girl offered to let us try literally every one. Honey Balsamic Strawberry with Cracked Pepper, Coffee and Bourbon, Pear with Bleu Cheese, Olive Oil. Yes, these are ice cream flavors. We tried the craziest ones, which were delicious and bizarre. I would never be able to eat a whole cone. We settled on a flight of Cinnamon Snickerdoodle, Raspberry Champagne, Goat Cheese Marionberry Habanero and Sea Salt Ice Cream with a Caramel Swirl. 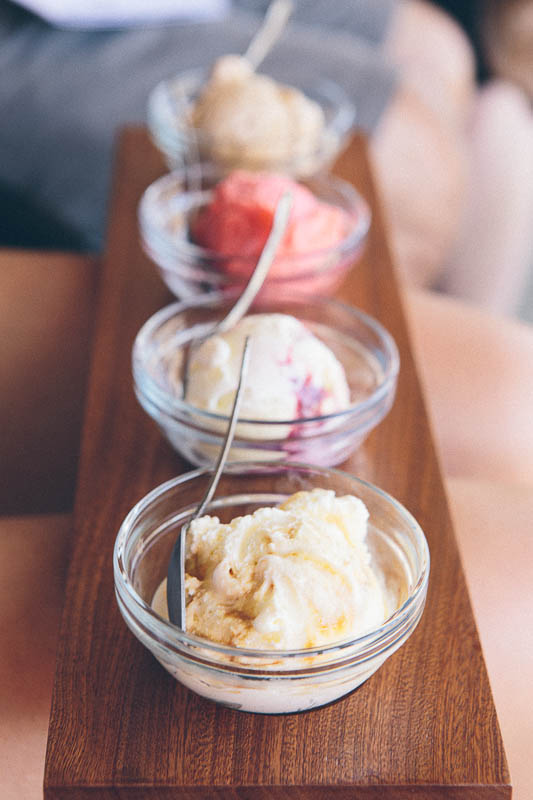 Oh! One evening, a photographer from National Geographic came to our campsite to take photos of us for the Travelers of the Year. Susan and her husband arrived in the late afternoon, wielding a picnic basket full of local beers, local artisan cheese and homemade salsa. The four of us sat around our picnic table, snacking, talking about travel and getting a tiny bit drunk until the light was just right. Golden Hour hit and there was a perfect spotlight on the front of the Airstream. Susan was ecstatic - it's every photographer's dream to have perfect natural light. Her photos turned out great; you can check them out on the website. 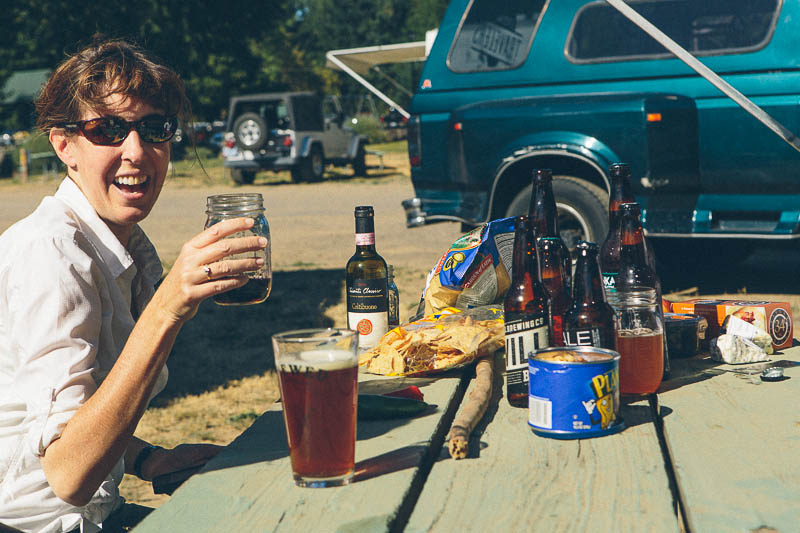 After a week in Portland, it was time to head north to Seattle. We didn't find the City of Roses to be as cartoonishly hip as "Portlandia" makes it out to be. Sure, there are stores that sell hand-crafted mason jars and brew-your-own-beer kits and stylish young people crowded around food trucks that cluster in empty lots. But in the past five years or so, a lot of large cities with a young hip-leaning crowd have seen these types of places pop up in the "cool" neighborhoods. Portland is large, but feels cozy. Hip, but livable. In the same day, you can hike to the top of the tallest waterfall in Oregon and eat your bleu cheese ice cream too.