Back in July when we stayed with Dave and Ann on their farmlet in northern California, Dave mentioned a little thing called Aluminogan. We had been hearing things here and there about a group of full-time Airstreamers who were planning to caravan up to Canada at the end of August, but for obvious reasons, we couldn't invite ourselves. Dave was on the fence about joining the caravan, but nudged us to email Leigh and Brian of Aluminarium, who were organizing the whole thing. We did, and a few days later I was working Canada into our itinerary.

As the days crept towards Aluminogan, we got more and more excited. We had been following most everyone through Instagram or their travel blogs since we started our trip. Following these full-time travelers sort of served as an affirmation that the lifestyle we had chosen wasn't totally crazy. We couldn't wait to meet everyone. 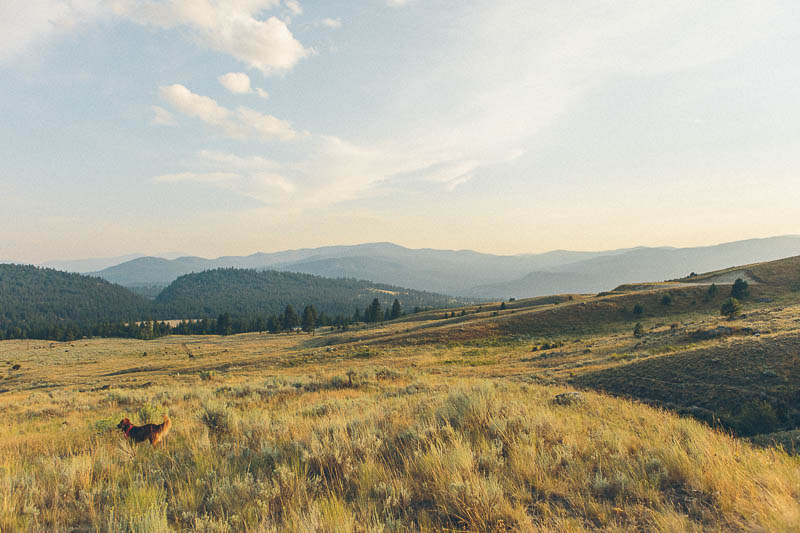 On Friday afternoon we headed towards Tonasket, which is in the middle-of-nowhere northeastern Washington, not too far from the Canadian border. After driving up a steep dirt road for what seemed like too long, we saw the rocky winding road that lead up to a cluster of Airstreams on top of a hill. Dave and Ann, who had met up with us in Winthrop the day before, followed behind us in their 19 foot Airstream per directions from Leigh.

Leigh had very carefully diagrammed the parking arrangement of all the Airstreams, and with us being the longest at 34 feet, our spot was at the end of the diagonal row of four gleaming silver bullets. 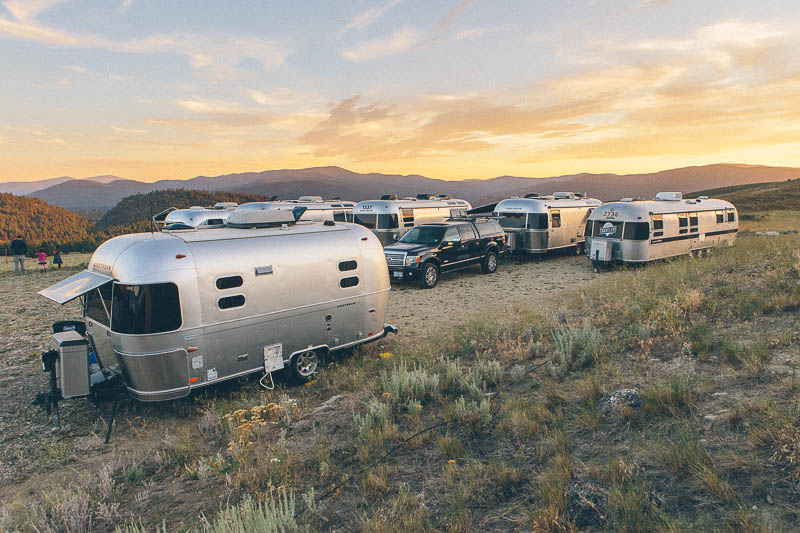 Our campground for the weekend

This parking job was the true test for John: to back up our trailer in front of 10 people who were much more experienced Airstream backer-uppers. If he fucked this up, there would be no living it down. Everyone was watching. And taking pictures.

Luckily, it was a breeze and John backed Loretta up like the pro that he is. We were offered welcome beers and began to make our rounds of introductions.

There's Leigh and Brian (and their pup Curtis), aka Aluminarium. They own the property and organized the whole thing - Leigh is an excellent organizer. They have a 27 foot Flying Cloud and are pros at finding the best boondocking spots (with a cell signal, of course). 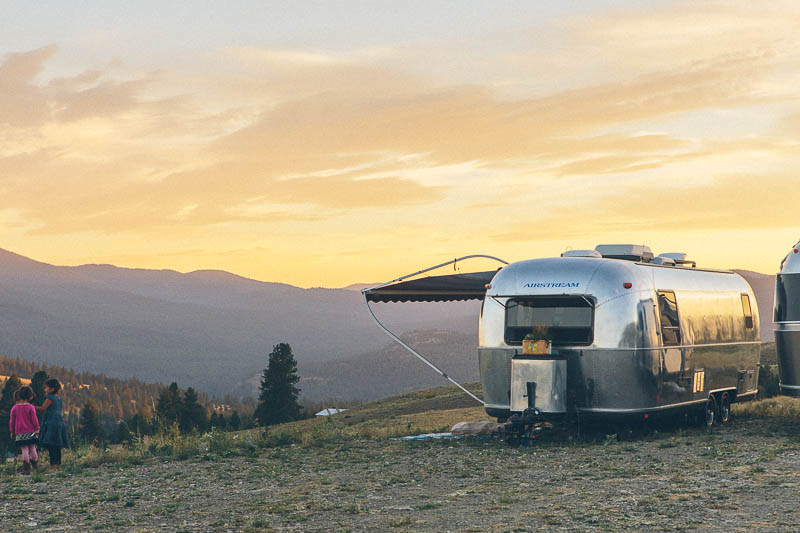 Tim and Amanda and pup Phineas of Watsons Wander, we had met when we shared a meadow outside of Durango a few months back. Because they had already been hanging out with Leigh and Brian for a few weeks, their 25 foot 1999 Safari had the prime parking spot: an unobstructed view of the valley.

We met Dan and Marlene and little Luka, Mila and Ava of MaliMish. They're a young family who travels most of the year in their 25 foot Flying Cloud. I don't know how all five of them make it work (plus Yoda the cat!), but they make it look easy. And their kids are adorable. 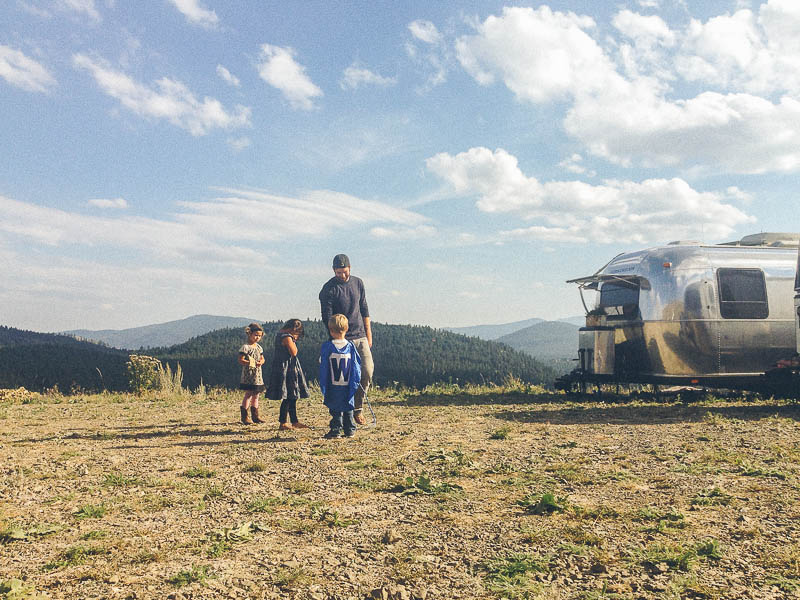 Josh of 1337Stream wrangling a few of the kids

Then there's Josh, Jessa and Jack of 1337Stream. They're another young family who has been traveling all over the country for the past three years. Jack is probably the best-dressed and best-traveled five-year-old I've ever met. 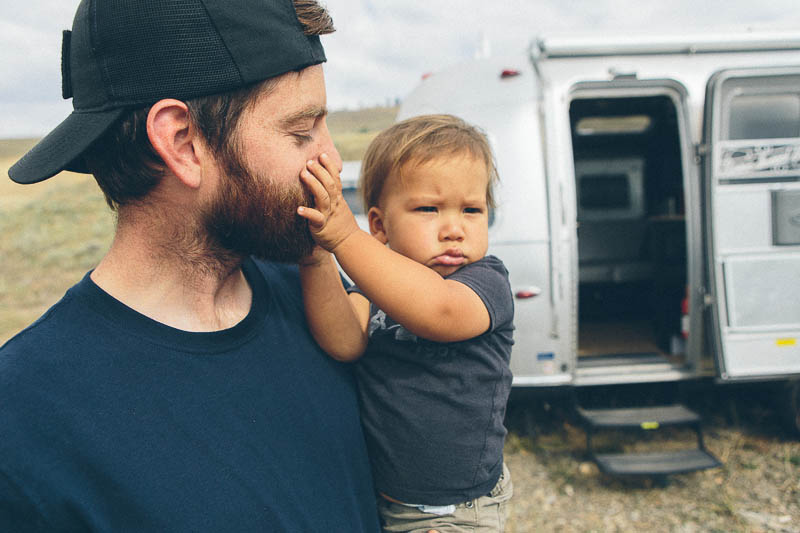 Baby Luka of MaliMish was obsessed with Josh's beard

Kevin and Laura of Riveted drove straight from Portland, where they live about half of the year (the other half is on the road). Laura is probably the most diligent blogger out of the whole bunch (with the exception of Leigh) and Kevin broke out an impressive array of gadgets over the course of the week.

Deke and Tiffany, aka Weaselmouth, along with pup Lucy showed up the next morning towing their 27 foot International CCD all the way from Seattle. Tiffany works at a distillery and shared some of her delicious homemade bitters. And these two win the award for most smiley and best teeth. 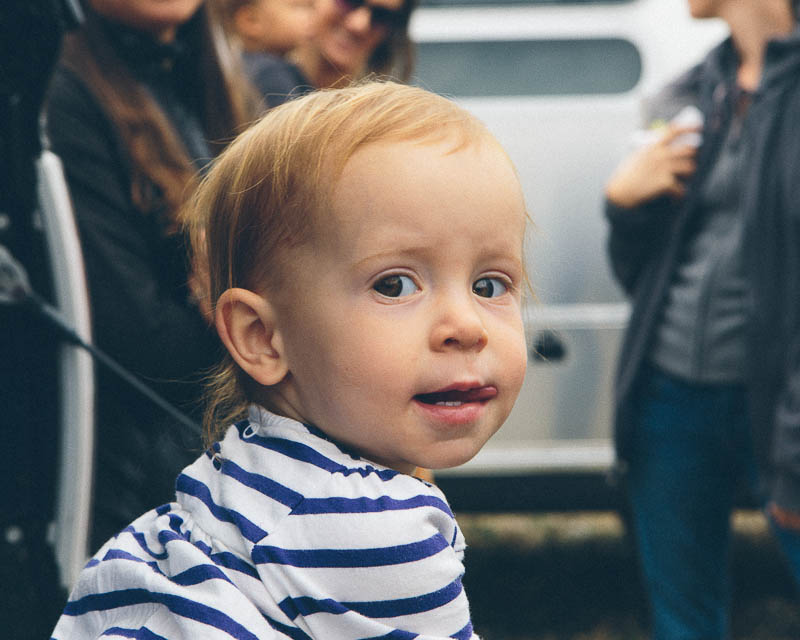 And then there's Dave and Ann, little Wynn and Gorilla of AdvoDNA. They have the smallest Airstream of the bunch, but are convinced that size doesn't matter. Except they're about to trade up to a 27 footer.

It was a little surreal meeting these couples and families when we felt like we already knew them after months of following them on social media. Even though most of us were strangers who had never met before, there was a sense of camaraderie right off the bat. Something about appreciating the aesthetics of an Airstream and living on the road full-time makes for good people.

Group shot (L to R): Josh, Jack and Jessa of 1337Stream; Tim, Amanda and Phin of Watsons Wander; Marlene, Mila, Ava and Dan of MaliMish; John, Bulleit and Laura of The Democratic Travelers (that's us!); Tiffany, Deke and Lucy of Weaselmouth; Leigh and Brian of Aluminarium; Laura and Kevin of Riveted; Dave, Ann and Gorilla of AdvoDNA

Saturday was our one full day on the property. We woke up and opened our door to find children and adults already milling about. As the "young kids" of the group, we had slept in. Typical. 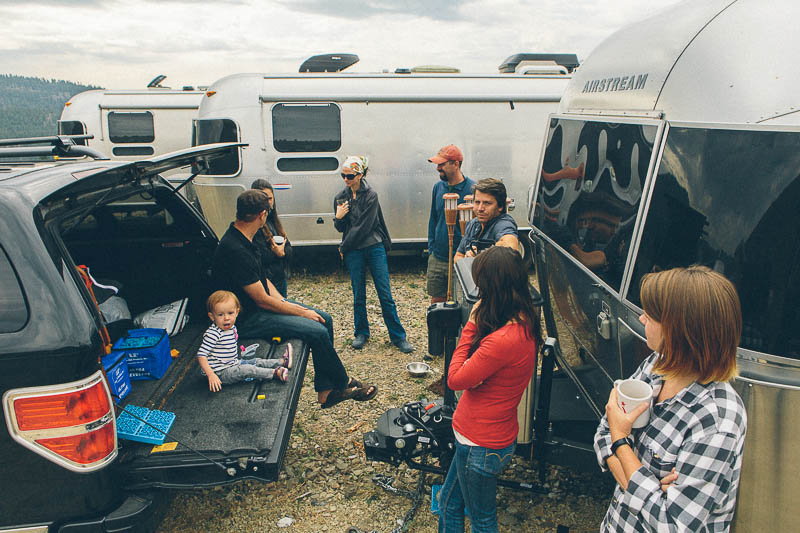 After exchanging a few Airstream tours, a few of the guys started up their grills to get their slow barbecued pulled pork cooking for the evening's potluck Taco Night. The rest of us settled into a semi-circle of camping chairs overlooking the valley and sipped on bloody marys that Leigh was offering to everyone. 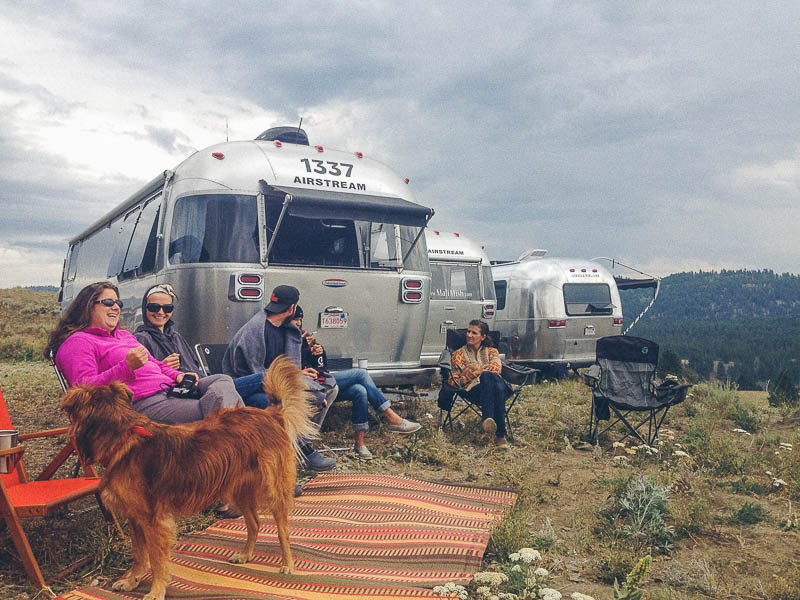 Enjoying the view and the bloody marys

Once the bloody buzz had worn off, Amanda proposed an "easy" four-mile hike to the top of the hill behind the property to anyone who wanted to join. Let me tell you something about Amanda: she is the queen of hiking. She makes a 12 mile hike that's uphill both ways sound like a walk in the park. I did not know this at the time. 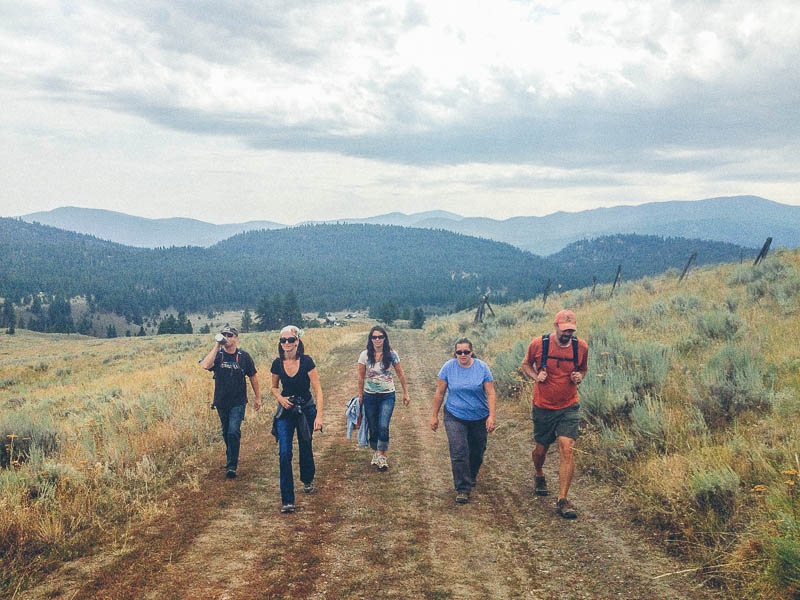 John stayed behind to start a band with Dan and Dave, so Bulleit and I joined the group. Ten of us walked up the long steep dirt road that took us past open grassy fields, cabins that looked abandoned and through a sparse forest with more felled trees than standing. Huffing and puffing half way through, I remembered I was way outta shape and fell back with the other non-professional hikers. 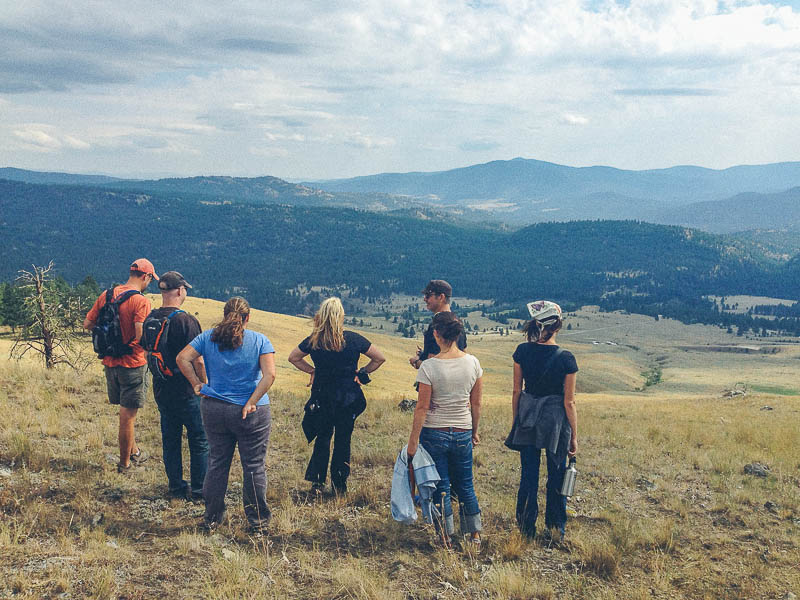 The top of the hill. If you look really hard, you can see our tiny little Airstreams down below.

Amanda finally led us to our destination: the top of the hill that overlooked the entire valley. We could see our tiny cluster of Airstreams waaay down below - it had looked much closer from down there. Everyone snapped photos for their future blog posts before we made the jello-y legged descent. 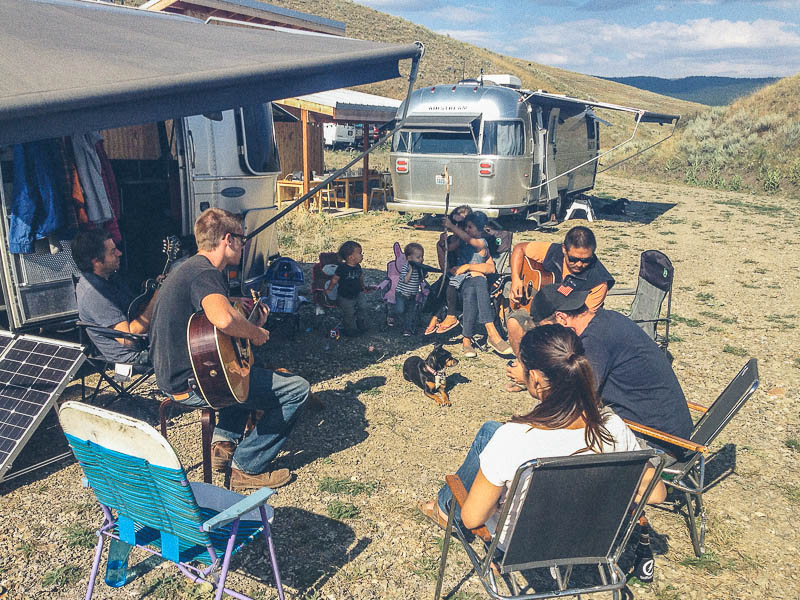 We returned to this jam session.

We made it back to camp and got cleaned up to the tune of the boys strumming on their guitars. Happy hour started early with a gigantic pitcher of margaritas that disappeared quickly. As the sun was setting, we all gathered around the long table lit up by Christmas lights and chinese lanterns with our Taco Night potluck contributions. There were three kinds of smoky pulled pork, guacamole, multiple homemade salsas, black beans, taco fixin's and a huge pot of crispy bacon. And Amanda baked two delicious vegan pies for dessert. Everything was fantastic…or might I say…pork-tastic. 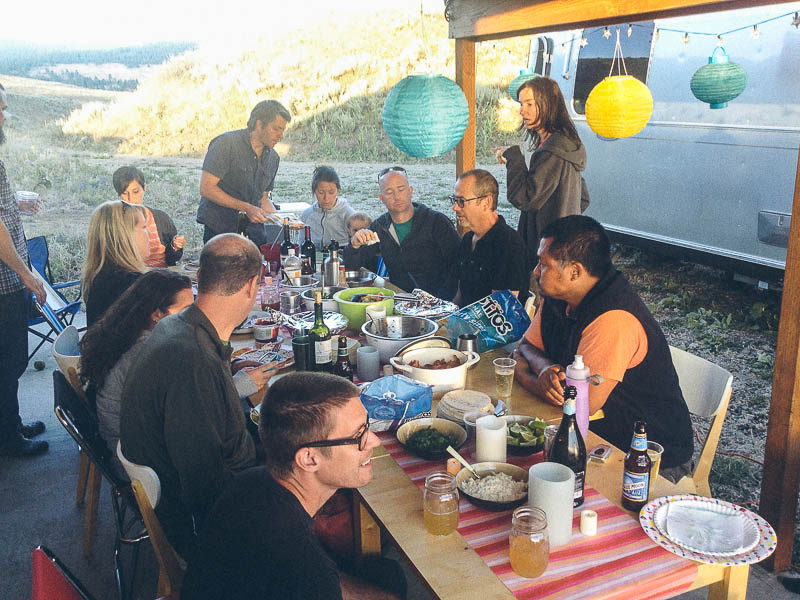 We were all too busy eating to notice the incredible sunset that was happening right behind us. As the sky over our lineup of Airstreams became more technicolor by the minute, the bloggers at the table (so…everyone) jumped for their cameras and iPhones to capture the sunset before it disappeared. A 20-minute photo shoot commenced and we all posted the same photo to Instagram. This is what happens when 16 travel bloggers get together - everything is documented. 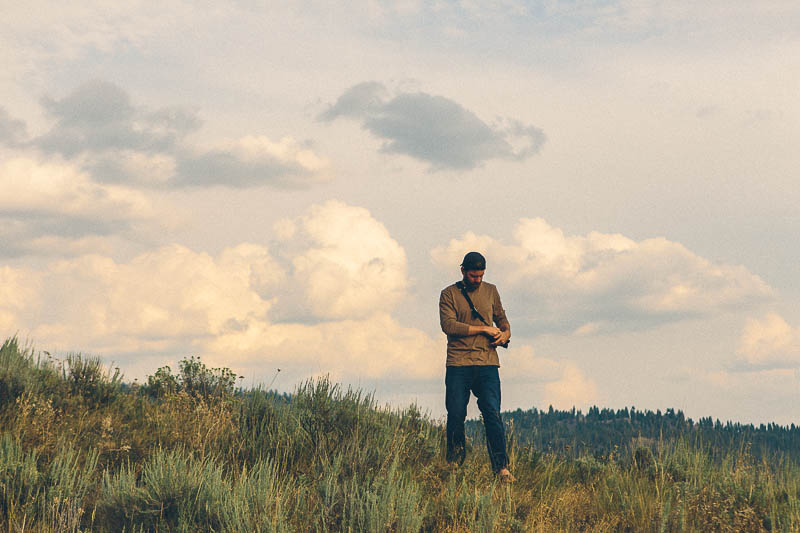 Josh of 1337Stream capturing the sunset

The next morning we packed up and got together to game plan the caravan across the Canadian border to Kelowna, BC. We were a little bummed to leave Leigh and Brian's beautiful property where we could do pretty much whatever we wanted, but we were excited to spend the next week traveling through Canada with the whole gang!